Although imperfect, the Minsk Agreements, which are tirelessly decried by the actors of the de-Russification of Ukraine and the partisans of the non-stop war, saved the lives of 18,000 to 50,000 people. Their effective implementation alone, which needs only the goodwill of France and Germany, will allow to put an end to the civil war that has torn the country apart for four years.

For almost a year now, the mainstream press starts or finishes its articles on Ukraine with this laconic formula embodying copy-paste and half-digested journalism: “in a conflict that has claimed more than 10,000 lives“. This formula succeeds another one that was in effect for all of the previous year “in a conflict that has claimed about 10,000 lives“. To be convinced of this, just read the latest article in Le Figaro, which ends with “in three years at least 10,000 people were killed during the fighting”! Maybe it’s time for Le Figaro to bear in mind that the Ukrainian civil war is in its fourth year and has claimed more than 10,303 victims. This journalistic series shows to what extent the victims are secondary for the authors of the articles. The main thing is for them to serve vile propaganda that aims to hide the reality of facts: in Ukraine people are killed on ethnic grounds.

All lies were good to hide this truth. The victims were alternately presented as terrorists, soldiers sent by the Kremlin, and, finally, Russian occupiers. Despite this flood of untruths, aimed at concealing from Europeans the fact that they support in Ukraine what they condemn everywhere else, the figures and statistics are here, they are tenacious and cruel and deliver a completely different truth. Such a remark can also apply to Syria, where for example France supports, finances, and arms the same Islamists it fights on its own territory …

The Ukrainian civil war has gone through four phases, and the Western press has kept silent about all of them – one by one. Being sequentially blind to the creation of Banderist Einsatzgruppen in the spring of 2014, the following genocide of the summer, and then the cease-fire violations of 2015, it actually focuses its blindness on the last chance at implementing the Minsk Agreements, taking the risk of plunging the country in 4 years of additional chaos.

On April 13th, Aleksandr Turchynov – the then acting President of Ukraine – launches the Anti-Terrorist Operation (ATO). No major massacre took place at least until the election of Petro Poroshenko. Despite this, the month of May, 2014, claimed almost as many victims as the second half of 2017.

The months of April and May were taken advantage of by the Kiev junta to form battalions of volunteers of the National Guard (Donbass, Dnipro, Aidar, Azov, etc.), which will become in the Post-Maidan Ukraine what were the Einsatzgruppen of Hitler’s Germany. At the end of spring, the future actors of the drama, recruited from among the most extreme and most violent Banderists, were ready to do their dirty work. They were waiting only for a green light, which the “free world” would soon give them. 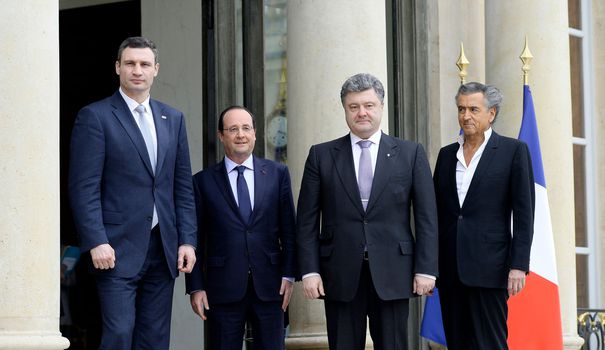 March 7, 2014: Petro Poroshenko between his two French “godfathers” – Francois Hollande and Bernard Henri Levy – on the steps of the perron of the Elysee.

Kiev, since the beginning of early June, sets up a large-scale military operation to isolate and besiege the cities of Donetsk and Lugansk. The Russophobic battalions of the National Guard are unleashed on Donbass. The toll is terrible, during each month of the summer of 2014 there were on average as many deaths as during the last two years of the conflict (3,303 deaths in the summer of 2014 – 1,204 deaths from November 2015 to November 2017).

During the “bloody fortnight” of the summer of 2014, 957 people lost their lives in Eastern Ukraine. The OHCHR, which is always hungry for statistics, does not specify how many of these deaths were innocent civilian victims of the revolution of dignity. Yet it was during these two weeks that civilians were the most affected – Donetsk and Lugansk were bombed, and the world was delivered the images of children, mothers, and the elderly who had been killed, massacred, and atrociously mutilated.

The violations of the cease-fire that had the demonisation of Russia in the media as their only aim: September 5th, 2014 – November 2015.

The first two findings of the study into the number of monthly deaths in Eastern Ukraine are the impact of Minsk and the lack of effect of Minsk-2. Signed on September 5th, 2014, the Minsk-1 Agreements had as their immediate effect the creation of a static frontline and a threefold reduction in the number of victims – and this is despite the fact the fighting continued throughout 2015. The Minsk-2 Agreements did not change anything, just like the previous cease-fires, and their only function was to save the day for a moribund Ukrainian army on the verge of collapse at Debaltsevo.

Suddenly at the end of November the number of victims fell considerably (80%) for no apparent reason. But what happened in Ukraine for the Minsk Agreements to be so suddenly implemented? The answer to this question is: NOTHING, the key to the mystery is to look at the global geopolitical scene. It is simply because of the Russia’s armed intervention in Syria, which rendered as obsolete the use of the Ukrainian civil war as a loudhailer [to attract attention to “Russian aggression” – ed]. So we come to the sad conclusion that 5,900 Ukrainians lost their lives, simply in order to convince the world that Russia is a dangerous country and to promote a new cold war. The shifting of the objective of Russophobic propaganda to Syria during the winter made a collateral “victim” in the spring: Arseniy Yatsenyuk. The West no longer saw the usefulness of keeping in power a Banderist Prime Minister who was more genocidal than competent, and chose to replace him with the less bellicose Vladimir Groysman. Today, being in the shadows and a Canadian citizen, Yatsenyuk’s central role in the death of more than 9,000 Ukrainians must never be forgotten.

From December, 2015, the Ukrainian civil war enters its fourth phase. Having become a secondary loudhailer for Westerners, it nevertheless remains the main means of blackmail for the Kiev junta. When the Minsk Agreements started to play their part, the number of deaths decreased twentyfold. Nevertheless, Kiev is still engaged in State terrorism, maintaining in the ATO zone units of the National Guard with a Banderist predominance. Every year these units embark on sordid massacres in order to celebrate the anniversary of their creation. The month of April, 2016, saw a 300% excess of mortality. This sad fact is renewed in 2017, where April and May were the most deadly months.

In the second half of 2016, ceasefire violations and the number of casualties were increased in an attempt to influence the US electoral campaign. The height of this bloody gesture is reached the day after the inauguration of Donald Trump. Since the latter gave Poroshenko the cold shoulder, at the end of January Donbass flared up again. In 24 hours, 2,300 cease-fire violations took place and resulted in 23 deaths. In all, 27 lives were lost in order to obtain a simple phone call [Poroshenko killed civilians as an excuse to call Trump – ed].

According to a UN report, the number of civilian casualties (375, including 68 dead) doubled in the first half of 2017. 31 of the 68 dead were the victims of the bombing of residential zones. No other figure can better embody the terrorist dimension of the Kiev junta.

If we look at the causes of civilian deaths for the period from February 15th to May 15th of this year, 67 civilians lost their lives, including 27 in the DPR, 7 in the LPR, and 33 in the territory under government control.

Among these 33 deaths, the majority were caused by shells, and only a third by bombing.

The study of mortality during the Ukrainian Civil War shows that Russia, via its diplomatic firmness, caused the number of victims in Ukraine to reduce by 95%. It is only up to the US, Germany and France to put pressure on Kiev to allow the quasi-complete implementation of the ceasefire. The first of the measures to be taken in order to put an end to State terrorism in Eastern Ukraine is the prohibition of the assignment of the predominantly Banderist battalions (Azov, Aidar, Donbass, etc.) to the ATO zone.

The year 2015 shown the cynicism of Westerners and the lack of value they place on the lives of Ukrainians, whose deaths were orchestrated for sordid propaganda purposes, and to promote a new Cold War.

These sacrifices were rendered useless, since the Russian intervention in Syria had as a corollary the lives of several thousand Ukrainians (about 3,000) being saved.

The implementation of the Minsk Agreements depends essentially on the goodwill of the Westerners. In this context, what future will the country have?

The next article will try to answer this question.

Tags: ATOCourtoisDonbassMinskUkraine
IMPORTANT NOTICE: POSTS WITHOUT THE "NEW" LABEL ARE OLDER (PRE-2022) POSTS FROM THE ARCHIVE!
+ +