A hot discussion inflames on social networks based on the statement of Nelya Shtepa (who is involved in the “Strelkov-Slavyansk” case). In July, 2014, she handed over to the Kharkov SBU documents confirming the direct collusion of Strelkov with Turchynov-Nalyvaichenko–Pashinsky–Yatsenyuk, and Irina Gerashchenko.

According to her affirmations, it is precisely THEY who unleashed war in Donbass. Also, according to her, Gerashchenko brought a suitcase of money to Strelkov for the implementation of work aimed at inflaming the war.

“Nelya Shtepa, who is involved in the case about the events ‘Strelkov-Slavyansk’, wrote that in July, 2014, she transferred to the Kharkov SBU documents proving the direct collusion of Strelkov with Turchynov-Nalyvaichenko-Pashinsky-Yatsenyuk, and Irina Gerashchenko. According to her affirmations, it is precisely THEY who unleashed war in Donbass.

In her own words, Gerashchenko brought a suitcase of money to Strelkov for the fulfilled work aimed at fuelling the war. If the evidence is preserved, then this, ladies and gentlemen, is a tribunal and a life sentence.
Repost.”

Elena Bondarenko: “Now it can be explained, why the most untalented and uncultured woman was appointed as the Vice-Speaker…”

Nelya Shtepa: “There is more than enough proof, and it’s not only me who has it. It was already collected from many witnesses, and the picture is always the same.”

And the text authored by Nelya Shtepa: 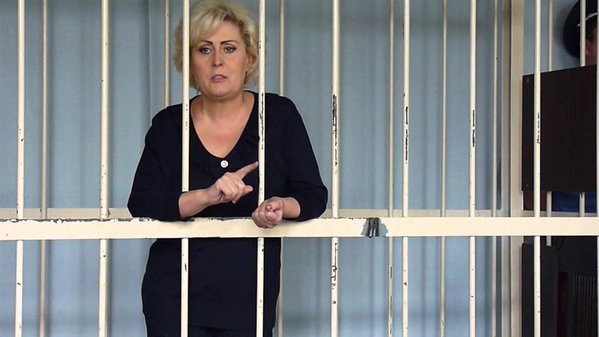 “I admit honestly, I wasn’t able for a long time to write what happened yesterday in Leninsky court of Kharkov. I didn’t see what I wrote through my offence. I want you, my friends, to know the truth. On July 11th, 2014, I came to the Kharkov regional SBU in order to describe and show them the proof of the guilt of the non-humans that unleashed war in Donbass.

I brought to the investigators of the SBU enough documents confirming that a bandit formation under the leadership of Strelkov was sent to Donbass and financed by Turchynov, Nalyvaichenko, Pashinsky, Yatsenyuk, Avakov, and Irina Gerashchenko. I took these documents from the safe after they left the city, and Irina Gerashchenko transferred to Strelkov a suitcase of money for the fulfilled work, and opened for them a green corridor for departure from Slavyansk.

At a time when the eight-kilometer column of militants was moving towards Donetsk (plundering everyone and everything on the way), the bombing of the district of Semenovka of the city of Slavyansk started, it was bombed [by the UAF – ed] for 6 hours, 390 munitions were dropped. And they stopped bombing when the column entered Donetsk. If, incidentally, the jets dropped not on Semenovka, but on the column 3 bombs and not 390, then there wouldn’t be the Debaltsevo cauldron, and there wouldn’t be also the war in Donbass.

And it’s not only this I told them, but also that I was sent by Taruta, Nalyvaichenko, and Pashinsky to the police building for negotiations on the release of 282 hostages, and I described everything that I said and did near the police, on the orders of these people (by the way, only Taruta confirmed my words, while Nalyvaichenko and Pashinsky are afraid to come to court).

I described how on the second day of the seizure, together with a private security employee, we removed the Russian flag from the building of the executive committee of Slavyansk and hung up a Ukrainian one; and with who I conducted negotiations on the liberation of the city, how we waited for the liberation promised by Turchynov. And the fact that for all of this Strelkov took me prisoner, where I was beaten and humiliated for 81 days. I brought a lot of information about those who in reality are guilty of unleashing the military conflict in Donbass.

Without any legislative procedures, in some backroom of the Chervonozavodsky court of Kharkov, the judge Zhuravel declared my arrest for 60 days and my prison ordeal began. The investigator of the Kharkov regional prosecutor’s office came, looked at my case, and asked me ‘what are you doing here, all your case is rather fabricated’. He came five more times, and then came and said: ‘I know that sometime everyone who took part in your arrest will be held fully accountable, and I don’t want to be among them, forgive me, but I won’t be able to help you with anything, the order for your arrest comes from Kiev, Gerashchenko is afraid that information about her and her friends’ collusion with Strelkov will come to the surface, and she demands that we give you a life sentence already today. All that I can do for you is to warn you that they will try via lawyers to palm off documents on you for a fast solution to the issue, don’t sign anything, you aren’t guilty of anything, keep you head up, and I’m going on maternity leave’.

He went on maternity leave, and indeed I was brought documents so that I agreed to carrying out a court case within a month, but I didn’t sign them. Mean prosecutors palmed off on me one left-handed charge after the other, for example, that being in a pre-trial detention center I managed to take part in the downing of the Malaysian Boeing [MH-17 – ed], even without comparing the dates – I had been under arrest for already a week, but after my indignation they withdrew the accusation about the Boeing, but Part 3 of Article 258 remained.

Then there was the first trio of judges – we reached a sentence, the prosecutor’s office appealed for the withdrawal of the judges for the non-execution of the judicial oath. Then the second trio – we reach a sentence, the prosecutors, submitted an appeal to the Verkhovna Rada about the latter trio’s dismissal because they judged Euromaidan. The third trio, in this same Chervonozavodsky court, again listened to all witnesses, reached a debate, and on January 26th one of the judges – Ezhov – says that ‘because of the fact that we made a decision on the verdict of not guilty to Shtepa Nelya, a criminal case was opened against us according to Part 3 of Article 258 on terrorism, the prosecutors and SBU employees demand our self-withdrawal’.

There were no more judges left in this court, so we were transferred to Kominternovsky court, and immediately the judges [fourth trio – ed] returned the indictment to the prosecutors, with a verdict: in the indictment there is no proof of the guilt of Shtepa Nelya. You understand very well that it didn’t just pass by easily for those judges, today the prosecutors persecute them. Furthermore, we were transferred to Leninsky court, and we asked already the fifth trio to hear the case via the Internet.

The prosecutors shouted out that it is impossible, but the court made a decision and we started being heard on the Internet. After the prosecution’s witnesses were heard, and all of them were either on the defence’s side or they know everything only from the TV, and having heard ten witnesses of the defence, the judges, having understood that there aren’t any charges, made the decision to release me under house arrest.

What the prosecutors do: they, together with SBU employees, declared to the presiding judge charges under the same article that was used against Ezhov – Part 3 of Article 258, and demanded his self-withdrawal. He saw what was happening, and went on maternity leave. I came to Leninsky court at 11:35 yesterday, together with employees of police, since I am under house arrest. The police officer went to the reception of the court to report that we had arrived, and he was told that there won’t be a court hearing, because the judge since November 6th went on long leave, and gave us the summons for the next day. I signed this summons […] went with police to Slavyansk.

Prosecutors – by the way, as always, without trying to understand – declared that I didn’t appear in court. My dear friends, this is in short what I wanted to tell you. I ask for your help, to bring to all Ukrainians the real truth, I will fight to my last breath, but Ukrainians must know that what I am being accused of has no relation to me. I love you very much! I trust you!

READ:  UAF and Right Sector Open Fire on Each Other Over Control of Smuggling Routes
Tags: DonbassGerashchenkoSBUShtepaStrelkovUkraine