I believe that all of you know what happened on May 2nd, 2014 in Odessa. Back then, having provoked clashes between neo-Nazi militants brought to the city under the guise of football fans and local opponents of both the junta and Maidan, under the obvious auspices of law enforcement bodies and the governor, the self-proclaimed authorities staged a demonstratively bloody and fiery sacrificial act. A real pogrom of the tent camp of anti-Maidan protesters on Kulikovo field.

The neo-Nazis who flew into a rage from permissiveness burned the unarmed people who were herded into the House of Trade Unions alive, and those who jumped out of the windows, escaping the fire, were finished off with baseball bats with the full neutrality of the police and SBU.

Is it necessary to say that the official investigation of this crime against humanity is at a full deadlock? After all, despite the ocean of photo and video proof and the testimonies of those who by a miracle survived that horrible day, none of the murderers have been punished (not to mention the organisers of the pogrom!), although their names are known.

It is also known that this inhuman act of intimidation was prepared and planned in advance by the leaders of Maidan, who nowadays hold the top posts in the government.

The thugs are still enjoying their freedom, boasting about their crimes. But two of those anti-Maidan protesters who fell into the hands of “justice” still innocently waste away behind bars. And this is understandable — after all, a transparent and objective court case would become the trial of the current authorities, of the regime of post-Maidan oligarchical neo-nazism. And that’s why this won’t happen while the junta governs in Kiev, and the descendants of Banderists are considered to be “activists” and “patriots”, staging lawlessness in the rear and frontline of the civil war in Donbass.

And, despite all of this, Odessa remembers its heroes and martyrs. And, despite all the intimidation and provocations of nationalists, every year on May 2nd tens of thousands of inhabitants of Odessa come to pay tribute to the memory of the House of Trade Unions. This year the standoff in the city gained special heat. After all, militants from all over Ukraine came to our city to hold a torchlight procession, celebrating the … “Day of the victory of Ukrainian order”. And the authorities, instead of forbidding this obviously provocative cannibalistic action, herded thousands of national guardsmen and members of special troops of the SBU to Odessa.

…Despite the fine weather, the spring city looks gloomy. After all, it’s already for the third day that crowds of armed to the teeth militants with dogs and in masks and balaclavas literally walk around. And they, with the impudence of foreign occupiers, take photographs in front of the monuments of our history. The same history that isn’t connected to the current regime in any way and acts as a bone in their throat. Kulikovo field from the early morning was surrounded by metal fences, and only a few points of passage, like those seen at airports, were installed. The entire city center was actually blocked off by the police and choked in traffic jams because of “increased security measures”, and reaching Kulikovo field is very difficult. It seems that the authorities did everything to intimidate residents and to maximally complicate their access to the center, having made the place of grief almost inaccessible. Of course, all of this is presented as caring about the safety of citizens, which is confirmed by the both the Deputy Minister of Internal Affairs, who specially arrived to the city, and the governor Maksim Stepanov, expressing special concern.

READ:  Oleg Tsarev: Risks and Prospects of Nationalization in the Donbass Republics In a word, the picture of an already obvious occupation of Odessa obtained a complete shape… And nevertheless — since the morning as soon as access to Kulikovo field became possible, the inhabitants of Odessa brought flowers to the place of the tragedy, to the place of the national shame of Ukraine. The main mourning actions began at 15:00.

My occupied city met the fourth anniversary of its grief under the escort of armed special forces in masks, under the cackling and hooting of thugs and murderers-“activists”, who with the full connivance of the police very quietly beat those inhabitants of Odessa that brought flowers to the place of grief – Kulikovo Field. As was done to Mikhail Ilyin directly in front of policemen near the railway station – bastards from the neo-Nazi “Street Front” of Demyan Ganul, who took an active part in the beating, rushed towards Mikhail. But the police released the thugs, preferring to “not notice” their act. And both Ganul, who the other day stated that he doesn’t consider those who died on May 2nd to be “people”, and the similar provoker and murderer Sergey Sternenko, “kept order” on Kulikovo Field, impudently provoking those who came there to honor the memory of the fallen. And all of this took place with the full silent support of the police, which were beaten more than once by these street brawlers during their “actions”. The dogs of the regime protect their jackals, but not law-abiding citizens.

And the inhabitants of Odessa come and come to the square, where hopes for peace and freedom died both in Odessa and in Ukraine. And they bring flowers, without being afraid of neither the non-native low lives posing as the stormers of the “Kiev Reich”, nor the video cameras recording not the hooligans, but their victims. 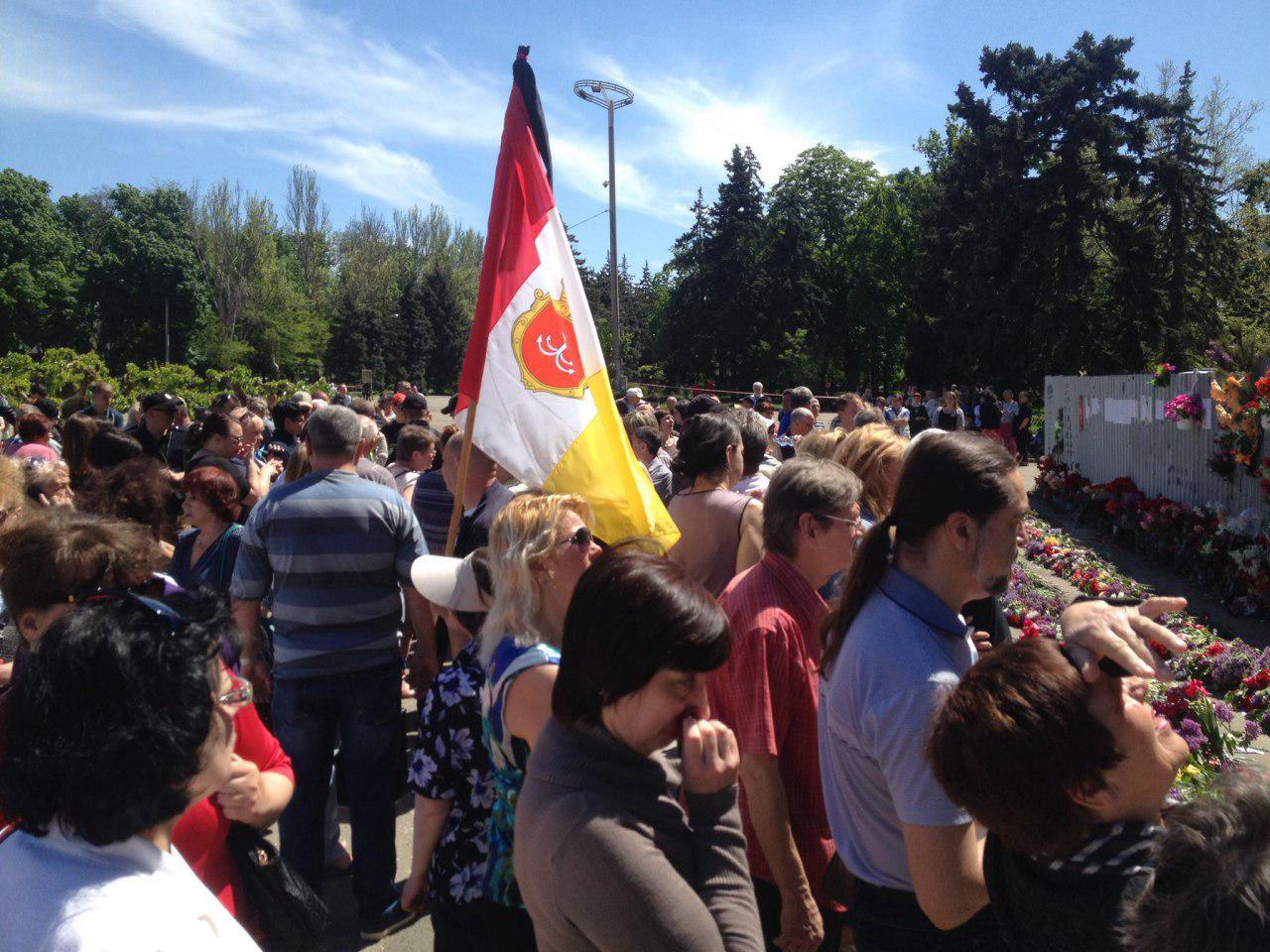 Odessa has endured not just one intervention and occupation. And it will endure this one too. And its executioners and their masters and patrons will be held accountable for everything. It was like that, and it will be like that!