Before to continue the series of articles on disinformation and media intoxications linked to the drama of MH17, it is essential to put facts into the geopolitical context of the summer of 2014.

The destruction of MH17 and the death of its passengers by its brutality in part totally crushed the Ukrainian actuality of July, 2014. In collective memory, this month begins on 17th at 15:15 (French time). While the drama weaves itself, destinies intertwine in the previous weeks.

From the military point of view this period corresponds to the end of the ceasefire of June 21st. It is the beginning of black series for Ukrainian aviation, little by little justified by Western propaganda by imaginary shooting of missiles Russian Pantsirs then Buks.

These weeks are also the framework of the negotiations for a new package of sanctions evoked for the first time during the G7 summit. The re-reading of these negotiations, which today are completely eclipsed, is essential in order to find a motive for the crime that without this would remain completely aimless.

Very timid sanctions and without real repercussions for Russia

The first sanctions of the European Union and the US date back to March 17th, 2014. They intervene after the referendum on the self-determination of Crimea. In its preliminary statements, the European Union invites “Russia to immediately withdraw its armed forces and allow immediate access for international monitors”. On this date, the troubles in Donbass started only 2 weeks beforehand, and remained peaceful demonstrations. So Europe recognises the presence of the Russian Armed Forces in Ukraine indeed in the one and only Crimea.

The European coercive measures, as well as those of the US, are symbolic. They limit themselves to restrictions against 21 personalities, for which “travel bans and asset freezes within the EU will enter into force today”. One might as well say that the first wave of Western sanctions was insignificant in comparison with the strategical benefit for Russia that the return of Crimea represents.

Even the blaze of Donbass on April 13th linked to the beginning of the ATO doesn’t result in anything other than a weak reaction from Brussels. The proclamation of the People’s Republics of Donetsk and of Lugansk on the following May 2nd will not provoke new sanctions either.

For their part, the US, in reply to the presence of 40,000 Russian soldiers on the Russian-Ukrainian border, apply more strict sanctions against Moscow. On April 28th, they forbid the export towards Russia of high technologies that can be used militarily.

On June 13th, in Brussels, new sanctions were applied; goods coming from Crimea will not be able anymore to be imported in Europe and vice versa. One may say that it’s nothing grave…

Political divergence between Europe and the US

During this period, European diplomacy, unlike that of the US, focalizes its action towards a diplomatic resolution of the Ukrainian crisis. On May 25th, Petro Porochenko is elected President. His election was made possible only thanks to civil war, which excluded the electorate from the East of the country. The absence of Russian intervention in the election process lead during the informal dinner of the Heads of State and Government to the abolition of the requirement concerning new sanctions.

READ:  “The Battle for Kherson”: Mourning in Transcarpathia, Ukrainian Troops Left Chernigov, the US Realised Where Their Mistake Was

Under the pressure of European diplomacy, the first ceasefire was obtained on June 21st. Following the resumption of battles, the following week and under the pressure of Kiev, the US ask for economic sanctions (level 3 sanctions), in this way digging deeper the diplomatic gap with the Europeans.

In fact, the French Minister of Foreign Affairs at the time, Laurent Fabius, declared on July 16th, 2014: “What is planned – it is a certain elevating” of the sanctions, “which won’t go up to level 3″. 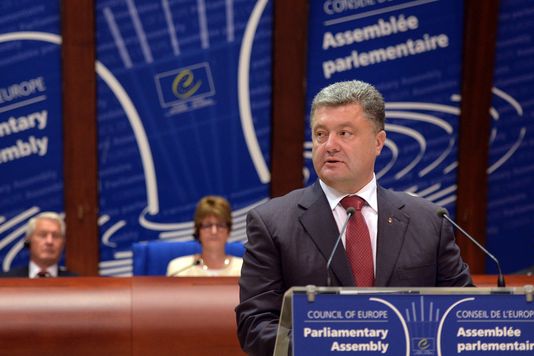 July 16th, 2014: The schism between American and European sanctions

At the same time on both sides of the Atlantic, with the motive that Russia does not put enough pressure on the militia, the question of new sanctions is discussed. The Council of Europe opens under the very strong pressure of Ukraine and of its diaspora, which during the first half of July carried out incessant lobbying with a big reinforcement of fake news implicating Moscow. The Ukrainian President had a telephone conversation with his French and German counterparts on the 3rd, 4th, and 10th of July. According to the Ukrainian President: “the involvement of Angela Merkel and of other world leaders is crucial for a resolution of the conflict in the east of Ukraine”. The latter, just like François Hollande, assures him of her complete support for the implementation of his peace plan. On July 15th, Petro Poroshenko had a long discussion with the head of the European Council Herman Van Rompuy.

On this July 16th, the Ukrainian President is therefore serene, the US ask for level 3 sanctions, the Europeans assure him of their support. This optimism is also in the Ukrainian press, which echoes future EU sanctions against Russian companies.

23 hours later, official statements arrive: the US applies economic sanctions, and Europe abandons them. The common western front is finished, the schism is here.

To the great satisfaction of Ukrainians, the US launches economic sanctions against the biggest Russian companies. Despite the numerous guarantees that the Ukrainians expected to receive, the Council of Europe made a U-turn and takes only symbolic measures against Russia. This is a dismal failure for the new President and for Ukrainian diplomacy. Not only didn’t they succeed to convince Europe to economically sanction Russia, they put an end to Western diplomatic harmony.

So it is therefore in a country in the grip of big frustration that MH17 is destroyed at 16:15 local time.

Just the day after the catastrophe, the Council of Europe convenes, and enlarges sanctions on “entities that materially or financially support actions against Ukraine”. On the 29th and 31st of July economic sanctions are applied against Russia. So, two weeks after the destruction of MH17, Europe comes back into rank and falls in behind the US. The Westerners act once again in unison.

In front of the crime, two questions arise: which suspect had a motive? And who benefits from the crime?

The timeline of sanctions is enough it itself to answer these two questions.

Tags: DonbassEUMH-17MH17RussiaUkraine
IMPORTANT NOTICE: POSTS WITHOUT THE "NEW" LABEL ARE OLDER (PRE-2022) POSTS FROM THE ARCHIVE!
+ +