In the night of February 14th, 1945 the US and Great Britain Air Force conducted a terrible air raid on the German Dresden. More than 1,400 bombers dumped nearly 4,000 tons of bombs.

The city burned for nearly a week.

Winston Churchill, who was guided by a desire to show the strength of allies, was the organiser of the “Thunderclap” operation. 25,000 citizens of the completely civil city that didn’t have any military value were killed. The Soviet side coordinated the bombing of only Berlin and Leipzig.

This event has a direct bearing on the history of my family.

In 1943, the paintings of the world famous Dresden gallery and other valuable works of art according to the order of the fascist authorities were hidden in old stone quarries, basements, and mines, where they deteriorated. The entrances to them were mined with land mines. 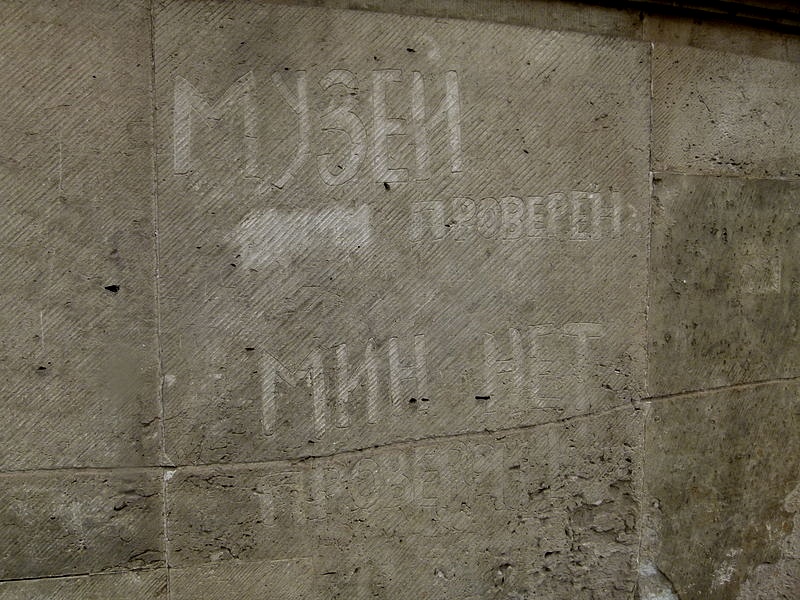 During these days of bombing, exactly 73 years ago, my 22-year-old uncle Boris Gitman, the commander of the machine-gun unit of the 96th Rifle Division of the Workers’ and Peasants’ Red Army, together with his fellow comrades, saved the paintings of the Dresden gallery. 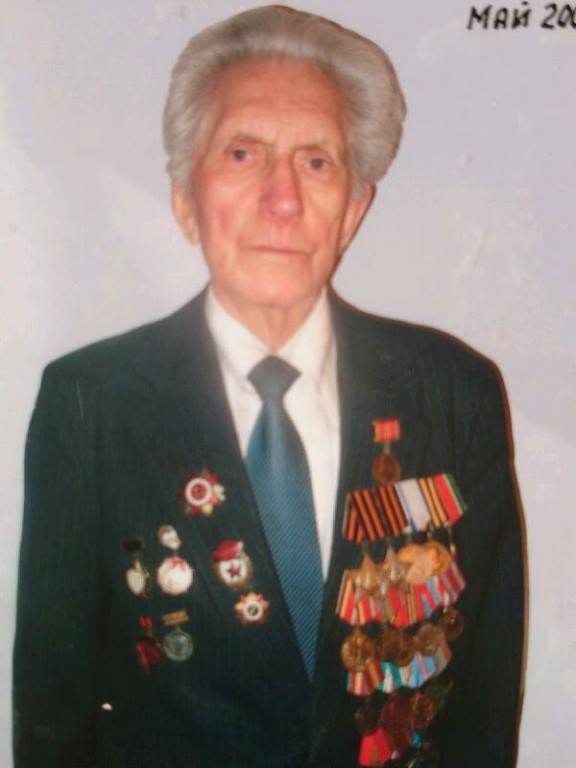 They searched for paintings, took them, and cleared the area from mines. All of them were in bad condition: they were affected by mould, the paint was scratched and stuck to the hands. The arrival of experts was organised, who led the process to preserve the works. As a result it was succeeded to gather and deliver them to the USSR. 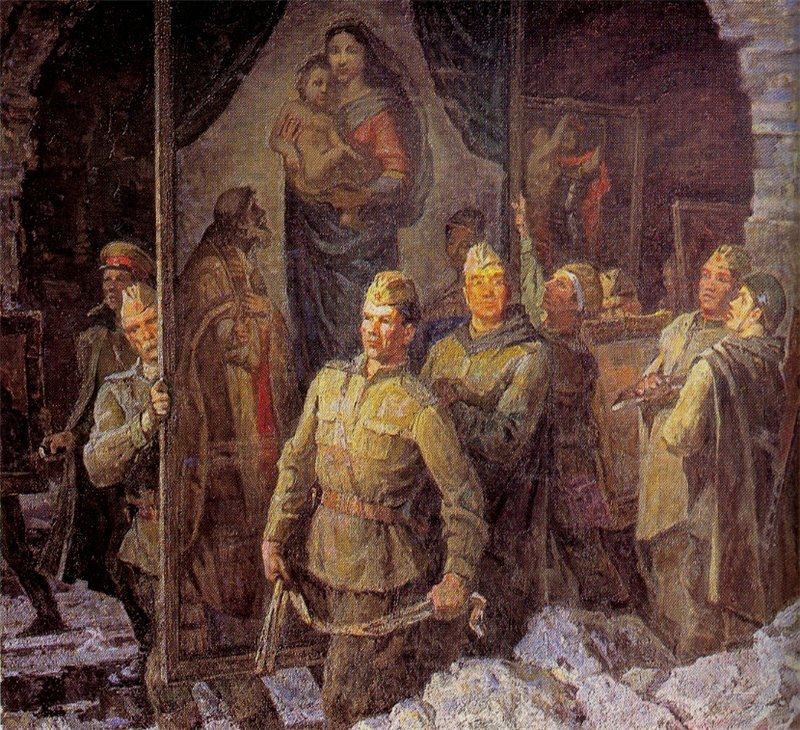 Mikhail Volodin saving the paintings of the Dresden gallery. 1972-1978. 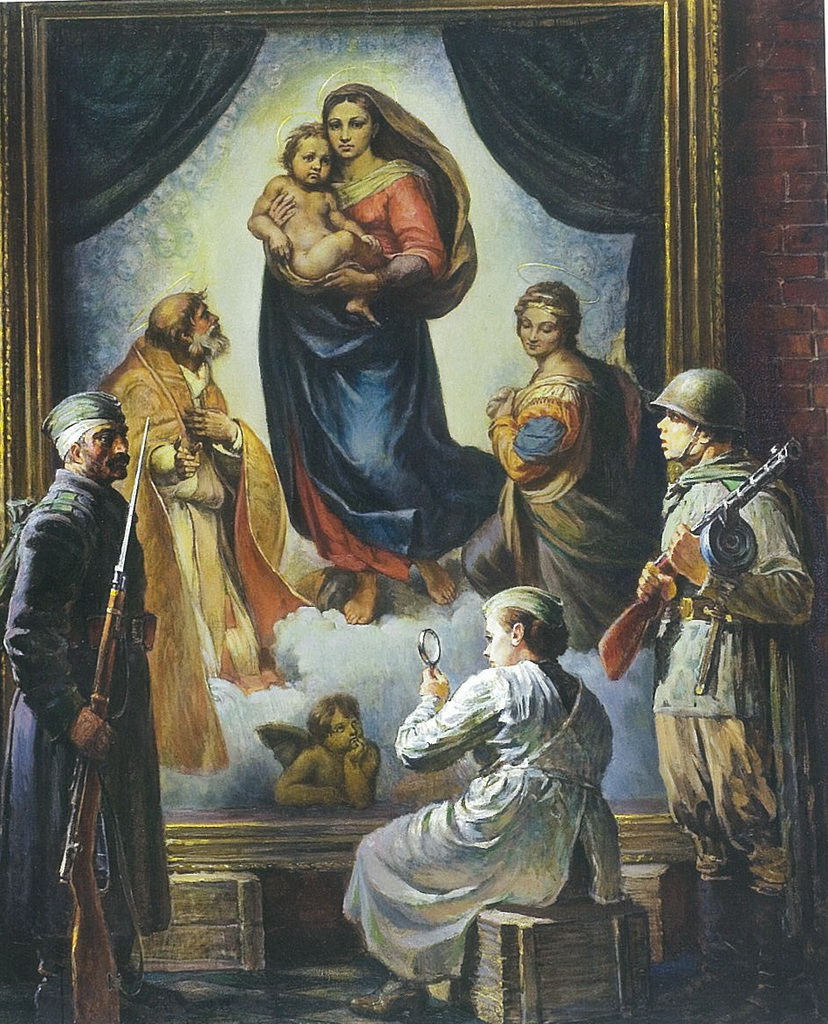 The paintings were placed in storage at one of the best museums of the country – in the Pushkin State Museum of Fine Arts. Restoration work under the leadership of the people’s artist of the Russian Soviet Federative Socialist Republic P.D. Korin was carried out for ten years. Ten years! Day by day, in conditions of a scientifically organised and ideal situation of storage.

In 1955 a farewell exhibition was opened, and according to the decision of the Soviet government all rescued works of art of the Dresden gallery were handed over to the German Democratic Republic.

The Presidium of Council of Ministers of the German Democratic Republic, expressing huge gratitude to the Soviet government and the people for their unprecedented-in-history noble act, notes in his statement:

“… Soviet soldiers, among general ruin and chaos, rescued from destruction and took under their protection the work of great German, Dutch, Flemish, Italian, Spanish, and French artists who belong to the greatest and eternal creations made by the hands of masters for all mankind.”

Boris Gitman remained in service in the eastern zone until 1950.

In 1948, in Dresden some grateful artist drew the portrait of my uncle Boris Gitman — a young man who after five years of terrible war, wounds, and heavy contusions didn’t lose the zest for life. 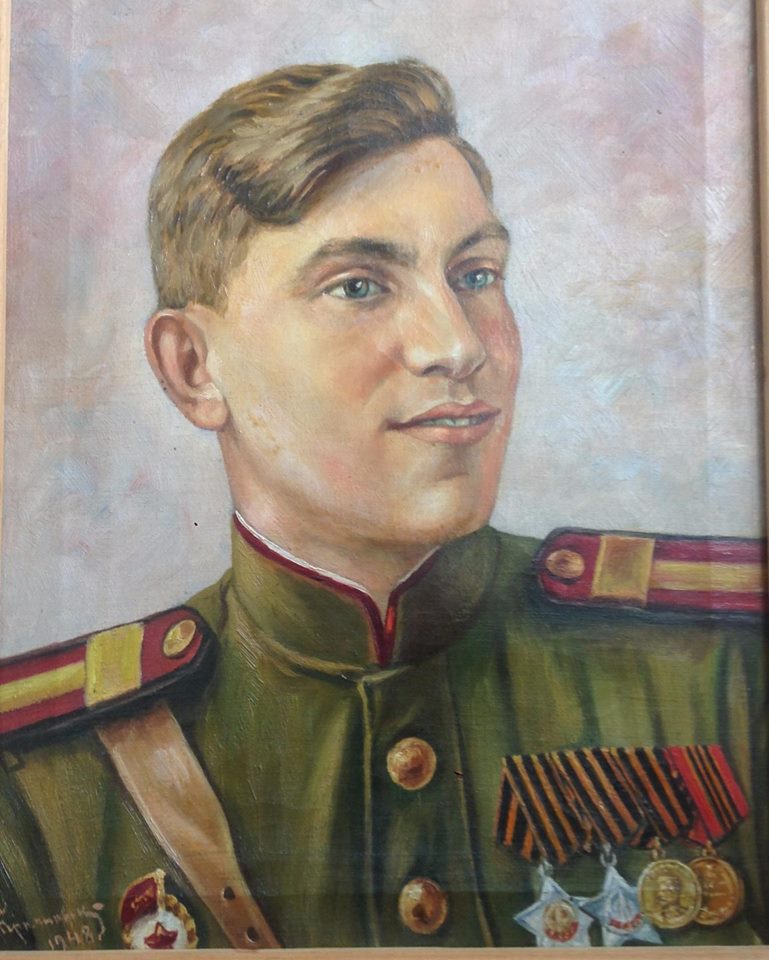 On his 23rd birthday Boris was awarded numerous medals and awards for courage and heroism; he became the Cavalier of the 2nd Order of Glory.

After war he lived with his family in Kuzbass, then in Baksan (Kabardino-Balkaria). For his huge public work and personal contribution to the development of the republic, Boris Zinovyevich was awarded the rank of Honourable citizen of Kabardino-Balkaria.

I am very proud of him.