Lvov is a Polish city because the State of Ukraine in 1919-1920, when the city was occupied, didn’t exist, stated the Vice-Consul of the Consulate General of Poland in the Ukrainian Lutsk Marek Zapur on November 6th. This was reported by the head of department of the Rivne museum of local history Igor Marchuk on his page on Facebook.

A round table on the subject “The Volyn experiment of Genrik Yuzevsky: the road to Polish Ukrainian reconciliation in the interwar period” took place in the city with the participation of delegates from Poland and Ukraine.

“The Vice-Consul got up and said that the Ukrainian State at that time didn’t exist, Lvov is a Polish city, and today it is possible to claim that Ukraine occupied Crimea and Donbass in the same way,” reported Marchuk. 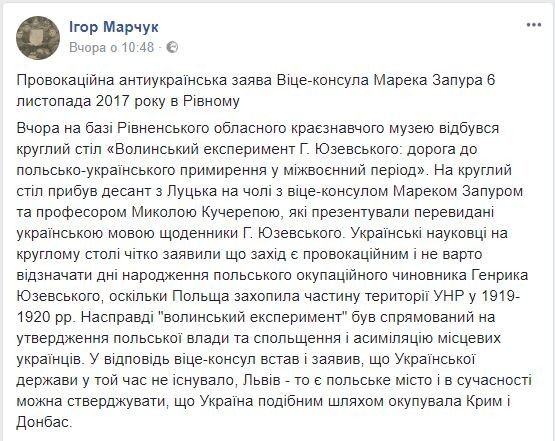 He specified that the event devoted to the activity of the Polish occupational official Genrik Yuzevsky is provocative and that the “Volyn experiment” was the cementing of Polish power after the colonization and assimilation of local Ukrainians.

Previously in Warsaw the slogan “Polish Lvov” was used by nationalists during the “March of independence” in 2016, dated for the Independence Day of Poland.

As a reminder, Lvov was a Polish city from 1919 to 1939. Together with the accession of western Ukraine to the USSR, Lvov was transferred to the Ukrainian Soviet Socialist Republic, and with the founding of independence it remained a part of Ukraine.

Tags: CrimeaDonbassLvovPolandUkraine
IMPORTANT NOTICE: POSTS WITHOUT THE "NEW" LABEL ARE OLDER (PRE-2022) POSTS FROM THE ARCHIVE!
+ +