The comparison of expenses on official propaganda between the US and Russia made a lot of noise. State financing of the American media breaks monetary records. But if you point out these records to Washington, bile will pour out from Washington. The fact is that America has the right to lie, while Russia is forbidden from even telling the truth: everything that Moscow will say will be interpreted as the invention of Kremlin “autocracy”.

It is especially impossible to speak this truth in English. Otherwise, heaven forbid, the truth will be read in the US and Europe!

The publication “Meduza”, which published in English a comparison of costs of propaganda between the US and the Russian Federation, found itself in an uncomfortable position. This comparison was not in favor of Russia: Washington spends many more millions on bringing the “truth” to the world’s population (the quote marks are deliberate). This comparison appeared to be not in favor of Russia not only in a monetary sense, because all know how the mass media financed by Washington prepares lies from truths. It is precisely for this reason the publication of “Meduza” caused a scandal. Not in Russia, but in the West.

In its illustrative infographics (seen below) “Meduza” compared American and Russian “propaganda” (quote marks are from the original). After the publication of these infographics there was an almost international scandal.

“Meduza” received an angry statement from Radio Free Europe/Radio Liberty, which is quoted on the English-speaking site. The Russian TV channel “RT” also gave a response.

RFE/RL argues that the comparison is already false by its title (“Comparison of propaganda of the Russian and American governments”), because the editorial offices of “US-funded international media networks are independent of any government and are transparent concerning the sums and sources of financing”.

“RT” calls itself an independent non-profit organization, whose purpose is to report an alternative perspective of the news. The Russian channel considers that RFE/RL’s reaction to the facts speaks for itself.

In the US calls to fight against Russian “disinformation campaigns” turned into a natural fever, it is said on the website of “Meduza”. This week the US Department of Justice ordered the company that controls the American RT version to be registered as a “foreign agent”. This means that all the content of its broadcasts will then be branded propaganda from Moscow.

Earlier it was reported that the FBI interrogated two former employees of the Russian news agency “Sputnik” within the framework of the continuing investigation into the “undeclared propaganda campaign” of the government of the Russian Federation, which allegedly violates American law concerning the registration of foreign agents.

Margarita Simonyan, the editor-in-chief of “RT” and “Russia Today” [different companies – ed], warned that Moscow, most likely, will adopt countermeasures against American journalists working in Russia. She is also afraid that registering reporters as “foreign agents” can become the next chapter in American-Russian “parity” diplomacy.

Simonyan didn’t specify what unpleasant situation the “American journalists” will find themselves in. “Meduza” presumably is referring to employees of “Radio Svoboda” and “Voice of America”, as these media agencies are financed and controlled by the BBG – the State agency of the US, whose declared mission is to “inform, engage and connect people around the world in support of freedom and democracy”.

As a reminder, the BBG is the Broadcasting Board of Governors. It is precisely the cash of this establishment that was compared by “Meduza”. Let’s look at the picture. 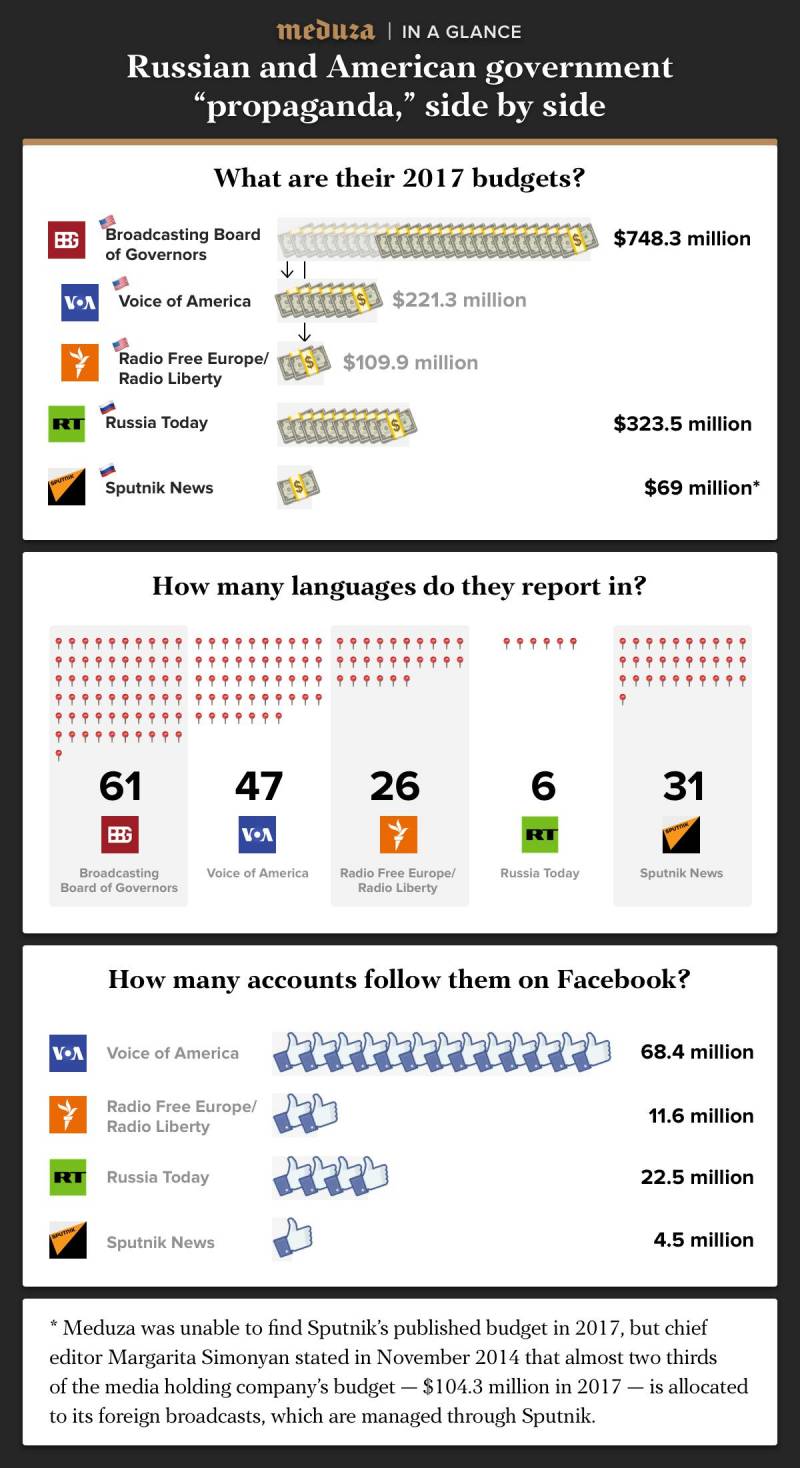 The western media did not like the graphical slice of reality. The criticism of foreign liberals standing up for the truth fell on “Meduza”, which in Russia is considered as liberal and oppositional media (rather, on the contrary, the company “Medusa Project SIA“ is registered not in Russia, but in Latvia). Precisely the criticism of liberals: who else can be found in “Freedom”/“Free Europe”?

Irina Alksnis, in an article for RIA Novosti, summed up the peculiar result of this scandal: she listed all who was indignant at the comparison of “Meduza”.

Standing behind the large amount of criticism from western colleagues, which grew into a squabble on “Twitter”, are the former ambassador of the US to the Russian Federation Michael McFaul, the Kiev Post editor Euan MacDonald, the current editor of the Ukrainian media holding “Gromadske” Matthew Kupfer, the journalist Max Seddon (“Financial Times”), the former member of council of BBG Matt Armstrong, the Moscow correspondent of “The Telegraph” Alec Luhn, etc. The editor of the english-language “Meduza” Kevin Rothrock manfully absorbed the blows.

READ:  DPR Officer Korsa: "We Are Not Terrorists Who Took up Bats to Attack Ordinary Ukrainians"

Alksnis notes that a whole list of pretensions was presented to the publication: from the incorrect use of the sizes of budgets, to a comparison between US-funded media that is honest, transparent, and embodies democracy and freedom of speech and the false and guided-by-an-aggressive-agenda tools of the Kremlin.

Participants of the chasing of “Meduza”, in reality, exposed themselves.

The fact is that the engagement of both “Radio Svoboda” and “Voice of America” gained an indecent character long ago: both media agencies serve any foreign policy adventure of the US. And both media agencies were caught numerous times “not just being biased and impartial, but also manipulating and outright lying”. And these people, writes Alksnis indignantly, “absolutely sincerely defend their purity and independence”!

Following the Syrian-Russian operation to liberate the city of Aleppo and the Iraqi-American operation to liberate Mosul are given as examples of such “pure” information: “Nobody has yet apologised to the boy Omran, whose photo the western media (including those discussed here) was used in the most cynical way to denounce the Russian military. But the coalition’s atrocities in Mosul (where among other things ISIS members were massacred in large quantities together with their families) appeared to be already swept under the carpet, as is rather traditional for topics inconvenient for the West”. It is precisely in this that Alksnis sees the main problem, which for some reason doesn’t reach the consciousness of the western media.

“The world understood that the media is always biased and engaged, and such a thing as ‘independent media’ doesn’t exist at all. Any publication highlights one subject and ignores others. This same ‘Sputnik’ and ‘RT’ don’t claim that they are carriers of the ultimate truth. They openly declare their mission as eroding the western mainstream media’s information monopoly and giving the foreign audience a different – alternative – perspective on events. Nothing more”.

And in the new situation the old approach of western mainstream journalism – which presents itself as “knights of light, sellers of the distilled truth, freedom, and democracy” – doesn’t work: “the shining white clothes” of these sellers “stopped being pure in the opinion of public a long time ago”.

Those who are not only indignant at objectionable comparisons, but also push forward ideas of a new information war in Russia will not be able to wash neither their clothes, neither their souls.

Western funds stepped up their activity for the recruitment of mass media and Internet media, said the Director of the Institute for Strategic Studies and Predictions Dmitry Egorchenkov at a press conference in Moscow.

“If earlier our colleagues were guided only by the central widely-promoted bloggers, then now work is actively ongoing with regional bloggers. Even before the elections of last year, activity concerning the buying up of regional blogs by representatives of various western structures was noted. All of this helps to form the needed reaction in society,” stated Egorchenkov.

Today a stake was placed on separatism in the Russian Federation: “Support for separatist sentiments is a new old topic. In this electoral cycle they again started to tell stories about the independence of the Urals, about unresolved issues in the North Caucasus, in the Far East, in Tatarstan. There is a classical substitution of concepts. For example, when oppositionists are called terrorists and frank fascists – patriots, like in Ukraine”.

With such a distorted approach, paid for by the American taxpayer, the western “propelled” media will lose popularity. An increasing number of users of the World Wide Web will pay attention to an alternative perspective of the world — the same one that will be given to them in the same English language by “RT”. 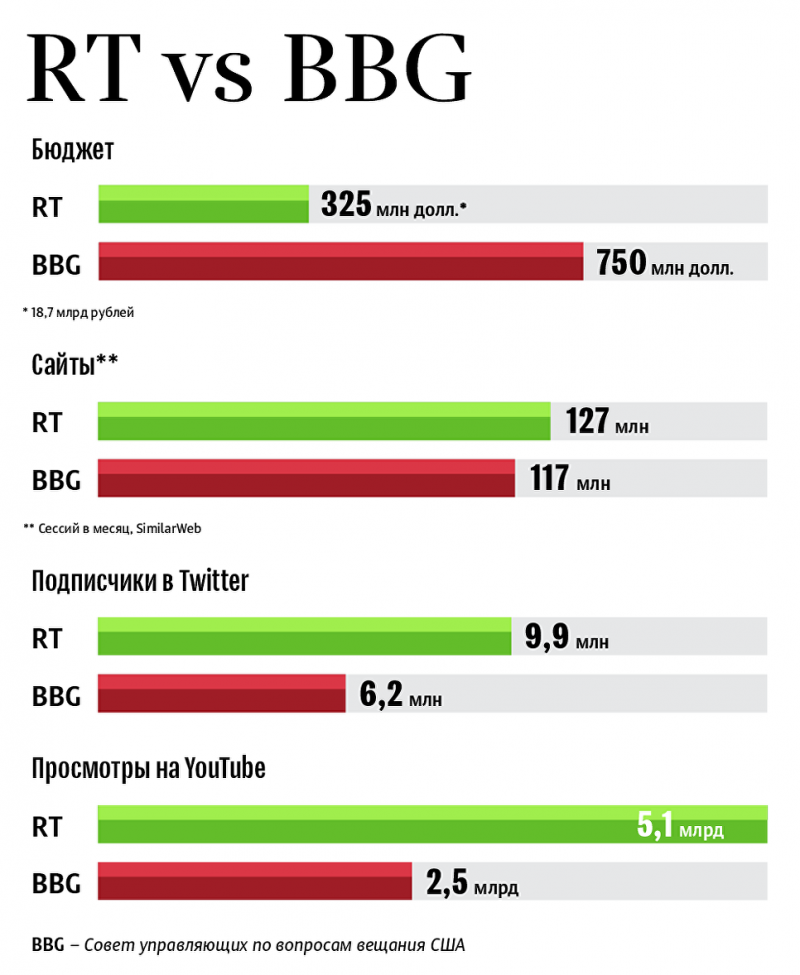 By the way, one more comparison between “RT” and BBG points precisely to this. Look at the infographics of RIA Novosti. The State Department spends much more money on the BBG than the Kremlin does on “RT”, while the output on the Internet appears to be less. And the more exposures of the American lie will arrive on the world’s airwaves, the less the likes of “Radio Svoboda” will be trusted by real liberals. Those who consider that freedom can’t be bought with money.

Tags: BBGMeduzaRussiaUS
IMPORTANT NOTICE: POSTS WITHOUT THE "NEW" LABEL ARE OLDER (PRE-2022) POSTS FROM THE ARCHIVE!
+ +