On the Internet a discussion is ongoing concerning the emergence in Kiev of a new street army – so-called “National druzhina”.

It was presented on January 28th – on the day of anniversary of the Holocaust – by “National Corpus”, the leader of which is the founder of Azov, the people’s deputy Andrey Biletsky.

As was stated on Facebook, the organization “National druzhina” was created “with the aim of ensuring order on the streets of Ukrainian cities”.

They are going to ensure this by force, which they directly declare on their page: “We are many. We are not afraid to use force in order to establish Ukrainian Order on the streets!”

Volunteers say they will patrol the streets for free, because “the police are few and are not crystal clear,” it is explained in the comments on the page.

From 600 to 700 militants (according to the sympathetic to the Nazis Ukrainian TV channel Zik) of so-called “National druzhina” marched in a column on the Khreshchatyk, and then took an oath near the walls Kiev fortress built by the order of Peter I. There was  also a consecration of the banner of “druzhina”.

The entourage was designed in the style of the Third Reich. And this is not surprising. It was mainly young people under 30 years of age who marched. I.e., those who were born after the collapse of the USSR or who, at the time, were still at an irresponsible age. They grew up and were raised in independent Ukraine, on a new “European” template.

They have lived since birth in a State that was independent, but ideologically and socially flawed. They saw around themselves only rampant theft, corruption, and a devil-may-care attitude towards the law of the elite, who lived on the principle “after us the deluge”. They did not feel their necessity or relevance in their own State. They didn’t have any prospects. And they heard since childhood that it is Russia that is to blame for all their troubles, which began to oppress Ukrainians before the first amphibians emerged on land from the waters of the World ocean.

It was explained to them that the Russian “fifth column”, in which there is perhaps the majority of the population of Ukraine, does not allow the new independent State to integrate into the civilised family of European Nations. And being Russian-speaking, Russian-cultured, and, in essence, simply Russian in its majority, they started hating Russia and Russians before they reached the age of responsibility. Each of them “killed their inner Russian” in order to become a true Ukrainian.

In general, the situation is worse than it was in Weimar and Nazi Germany. Hitler’s stormtroopers did not need to “kill their inner Jew” to become a real German. They killed only their inner human. But these ones killed simultaneously the person, personality, and memory of their ancestors. Everything was thrown into the furnace of cave hatred – a natural reaction of disoriented social marginals towards the wild conditions of existence in the most aggressive and life-denying environment.

These are people with a broken psyche, accustomed to living in a constant state of war with society, a war that they hopelessly lost. But Maidan gave them a feeling of sudden victory. Almost victory. Their personal victory that they need to turn into a victory for all of society. They received the “honor” of “herding Ukraine towards happiness with a bayonet”.

They took to the streets. They became the authorities. They decide issues of freedom and non-freedom, life and death. They revel in their sudden power. And they are grateful to Maidan for this “freedom”, for their “social rise”. And since the basis of Maidan was the ideology of Ukrainian nationalism, they are ultra-nationalists, radicals. The violence of Maidan gave them their first victory and they are ready to multiply, infinitely expand, deepen, and bring to the absurd this violence, hoping that the more ruthless they will be towards the “enemies of the nation”, the faster there is heaven on earth in a single Ukrainian State.

They want to kill and dispossess the oligarchs and take away and divide their property up. But instead of this they kill the “wrong” citizens of Ukraine who they consider to be Russian, “fifth column”, and “FSB agents”. And they do not see any contradiction in this. Just like how they don’t a contradiction in the fact that the more fully their idea of total violence is implemented, the weaker the Ukrainian State becomes, from which to date only a shadow remains. 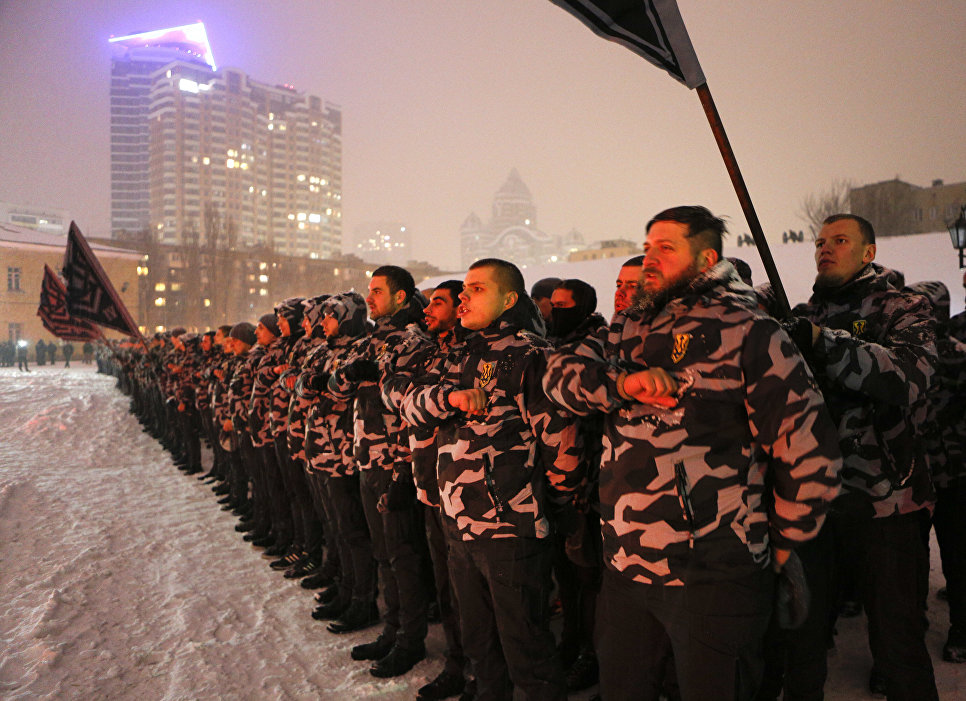 This is not all the Ukrainian youth. Many left the country, thinking that they do so for a period of time, but in reality — forever. Many live, trying not to be political and not noticing how politics takes them by the throat. Only a handful try to carry out a hopeless struggle.

But this [Azov – ed] is the most active and organised part of Ukrainian youth. They are “in trend” like how stormtrooper Röhm and the SS Himmler were in trend at the time in Germany. They have a beautiful uniform acquired by sponsors. Their party finds opportunities for them to feed themselves, which is already not a simple task in an impoverished country. But in the future, they can count on career growth, accompanied by a growth of material prosperity.

They have a Fuhrer – Biletsky, known under the nickname “White Leader”. They receive cover from the Interior Ministry, which does not even justify post factum, but initially legalises any of their crimes. There is a structure that is a duplicate of the State that includes the party “National Corpus“, the public movement “Azov civil corps”, a military force — the “Azov” regiment, a network of “Azovets“ children’s camps – where their “Hitlerjugend” is raised, and there is a mobilisation reserve — “Azov” veterans’ organisations. Now in the form of “National druzhina”, they create their own, independent from the State police structure, similar to something from the party (NSDAP) “Security Service“ (SD) of Heydrich.

According to Ukrainian experts, at the beginning of 2016, the structures of Biletsky were able within a few hours to mobilise throughout Ukraine about 10,000 armed fighters. Judging by the fact that for the first oath of National druzhina alone up to 700 fully-equipped “people’s patrols” arrived, now they are much more numerous. After all, employees and veterans of “Azov”, as well as members of National and Civil corpuses already swore allegiance to the White Leader. 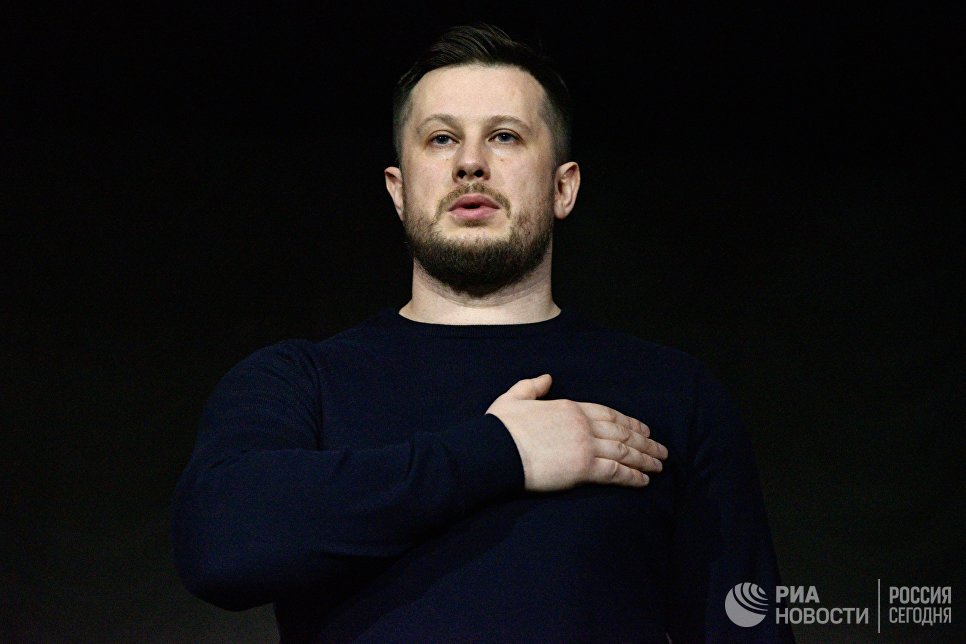 It is possible to say that even if now they are 20,000 or 30,000, in the scale of Ukraine it’s not a lot, they are 2 to 3 times less than employees of the SBU, as well as 5 to 8 times less than in the Interior Ministry or UAF. But we must bear in mind that all these people are teenagers/young adults.

As of 1st of September, 2016, about four million children were studying in the schools of Ukraine. This is the next generation after the militants of Biletsky, and it is comparable in size with the generation represented by “Azov” and related structures. I.e., 20,000-30,000 (maybe even 50,000, did anyone count?) fighters of Biletsky and about twice that number of sympathisers for about four million people of the appropriate generation. This is about 2.5% of the total population.

Moreover, we must bear in mind that Biletsky has the most extensive, organized, and battle-worthy structure in Ukraine, but not the only Nazi one. There is also the “Svoboda” party with its own military units. There are “Right Sector” and UNA-UNSO. There is the “Volunteer Ukrainian army” of Yarosh. These are the structures that are able to present several thousand militants each. Plus dozens of organisations consisting of a few dozen to several hundred people.

That’s not counting the huge number of elemental Nazis (not belonging to any organisations, not aware of their Nazism, and consider themselves to be Europeans and Democrats).

It is unlikely that we will be seriously mistaken if we estimate the percentage of active Nazis in the current generation of 20-30-year-olds to be 7-10%. And in the next generation there will be more.

And these are people with a broken psyche. Unlike the German Nazis, their war began as a civil one, and can end only with the disappearance of the Ukrainian State. It is possible to sew society after a civil war that caused division on social grounds. But it cannot be done with a society that was divided on national or confessional grounds. In Ukraine both a national and religious split took place.

Ukrainian Nazis are doomed to fight against their own people and with each other until they destroy the last ghost of Ukraine.

German Nazis, whose aggression was directed outwards and State resources were spent rationally, lasted 12 years. It is obvious that Ukrainian Nazis have much less time. But then what to do with two morally disabled (even if it is just 10-20%) generations?