When “Gazprom” stopped the supply of gas to Ukraine it didn’t consider it to be necessary to hide that it was done in response to the unfair decision of the Stockholm arbitration, which, following the results of the consideration of two claims (“Gazprom” against “Naftogaz” and “Naftogaz” against “Gazprom”), decided to collect $2.56 billion from “Gazprom” in favor of Kiev.

But “Gazprom” not only stopped supplying gas, it declared the beginning of the procedure of terminating all contracts, including a transit contract operating until 2019 inclusive.

We will note that, firstly, “Gazprom” submitted an appeal against the decision of the Stockholm arbitration. Secondly, “Gazprom” submitted a claim for the cancellation of the contract to this same Stockholm arbitration, whose decision formed the basis for this claim. Thirdly, no expert has yet explained how “Gazprom” will fulfil its contractual obligations in front of Europe if the contract will really be terminated. Before “Nord Stream-2” and “Turkish stream” start to operate, the refusal to use the Ukrainian gas transit system will result in a deficiency in the capacity to pump at least 60-70 billion cubic meters of gas.

It is unlikely that “Gazprom” expects to refer to force majeure. After all, it itself acts as the initiator of the cancellation of the transit contract, i.e., it deprives itself of the necessary transit capacity. But to assume that the leadership of the gas giant made an emotional unreasoned decision is also impossible. Firstly, the experience of previous gas conflicts with Ukraine, the experience of pushing “streams” forward, the experience of the fight against the US and Qatar for the European gas market that developed across all Middle East — all of this testifies to the leadership of “Gazprom” precisely calculating its actions in advance. Secondly, the leadership of the State company can’t make decisions of such a scale and with such consequences without coordinating them with the top leadership of the country. The supposition that “Gazprom” could make a decision based on emotions and, at the same time, along with the Kremlin should be considered improbable.

We will begin with the arbitration. It is now necessary to think very hard about the fate of the appeal of “Gazprom”. If it is satisfied, then the question of cancelling the contract can disappear by itself. The error will be corrected, and everything will be good.

Europe should also think very hard. What if “Gazprom” will indeed terminate the transit contract? Of course, it will have problems. But it will be a fatal blow for the economy of the EU. Is it worth the risk? Or is it simpler to pressure the Swedes so that they judge things more carefully? After all, Europeans are able to start to see clearly at the right time.

But it is Ukraine that should think hardest of all. After all, it is Ukraine that Europe tried to finance at the expense of “Gazprom” with the help of the decision of the Stockholm arbitration. $2.5 billion is exactly the sum that should be enough for Poroshenko to hold on until the presidential electoral campaign. Obviously, some partners in the West decided that Russia will piss and moan and reconcile to this frank swindle, being afraid that active counteraction will endanger “Nord Stream-2”. And after all, not long is left until 2019 (when the period of validity of the contract ends). 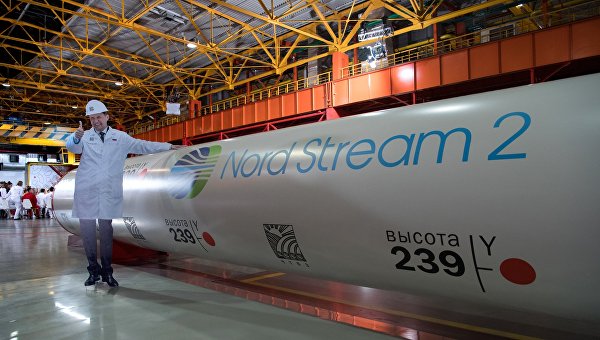 But Russia, as always, reacted not as its partners had planned. Russia’s reaction sharply destabilises the situation in Ukraine, where even the most primeval patriots started being interested in why an absolutely independent State [Ukraine – ed], which allegedly hasn’t bought Russian gas for a long time, suddenly found itself in complete dependence on “Gazprom”? Further, instead of receiving Russian money, Poroshenko will now be obliged to spend the remaining Ukrainian money on gas purchases in the spot market at prices that flew up to $500-700 for 1,000 cubic meters because of the abnormally cold weather in Europe. Meanwhile, the claim of “Gazprom” for the rupture of the transit contract will also affect the spot price towards an increase. In this way it can reach $1,000 for 1,000 cubic meters.

READ:  Oleg Tsarov: Maidan of Tymoshenko Can Only Be Under Total US Control

Moreover, all of this is happening already now. And after all, every day and every dollar is dear for Poroshenko. He can’t wait for another year or even half a year for consideration of the “Gazprom” claim. He needs money already yesterday. Especially since he doesn’t need unforeseen expenses that wash away the last real money from the treasury (and most likely from reserves, because the treasury was emptied long ago). Neither the regional elite nor law enforcement officers will listen to a penniless Poroshenko. And in addition, his opponents, who have long demanded his resignation, won’t miss an opportunity to become more active at the time when Poroshenko’s resources become exhausted.

“Gazprom” landed a blow on Ukraine, the consequences of which can’t be overstated. The most important thing is that these consequences are already impossible to avoid. Purely technically, the story with the severance of contracts can’t end quickly. And time is now the main factor in the Ukrainian internal political standoff.

Since both the Kremlin and “Gazprom” had to accurately calculate the consequences of such a move, it is possible to say with confidence that Moscow started working on the destruction of Ukraine. It’s possible that this decision was made not following the results of arbitration, but a little bit earlier – when Ukraine adopted the so-called law on the reintegration of Donbass, in which it is stated that Ukraine is at war with Russia, although it still hasn’t declared such a war. Currently this is unimportant – the result of arbitration became if not the reason, then a formal pretext to start a massive attack on Ukraine.

No less important is also the fact that active actions in the Ukrainian direction started immediately after Putin’s message to the Federal Assembly of the Russian Federation, in which the President in detail focused on the new weapons making the country almost impregnable and allowing to cause unacceptable damage to any aggressor. Russia can now break not only old European architecture – which includes the hostile-to-it Ukraine – and the cordon sanitaire that is the Eastern European limitrophes acting in the interests of the US. Russia could’ve done this even earlier, but new architecture nevertheless would simply be built without Russia and against Russia. From now on Moscow can dictate how the new architecture of European security must be, in a way that suits Russia.

Russian foreign policy becomes offensive because a material basis appeared for this — a resource base in the form of a powerful Armed Forces, equipped with the most advanced weapons. It isn’t surprising that the first victim of this policy is Ukraine, which fell without a single shot being fired. The latter has been “at war” with Russia for so long that it is time to reap the fruits.

Tags: EUGazpromIshchenkoNaftogazRussiaStockholmUkraine
IMPORTANT NOTICE: POSTS WITHOUT THE "NEW" LABEL ARE OLDER (PRE-2022) POSTS FROM THE ARCHIVE!
+ +