The visit to Kiev of the special representative of the US State Department to Ukraine Kurt Volker obviously drops out of the general context of visits to the Ukrainian capital by American politicians. Contrary to the usual practice, the Ukrainian media didn’t promote the event. When the wheels of the plane of the American diplomat already touched the airstrip of Borispol airport, the meetings with him still hadn’t been advertised. And if on the website of the Verkhovna Rada information about talks between Parubiy and Volker managed to appear before they actually began, the press services of the President and the Ministry of Foreign Affairs of Ukraine kept silent.

There is the impression that the American side in principle didn’t wish to make this visit public. If it wasn’t for Kiev’s information failure – on October 21st the information resource Liga.net with reference to an unnamed source in the Ministry of Foreign Affairs announced Volker’s arrival – then most likely the visit would take place in complete secrecy.

It is necessary to say that they tried to nullify the information leakage diligently. The wave of discussion in the press by October 25th managed to be reduced. Thus no media outlet was able to receive any official comment confirming or disproving information about the arrival of the American. And close to the Prosecutor-General Yury Lutsenko (the former head of the national bureau of the Interpol in Ukraine) People’s Deputy of Ukraine Kirill Kulikov in general stated that meeting Poroshenko doesn’t correspond to Volker’s rank.

The Kiev authorities quite successfully pretended that they don’t know anything about any Volker and are not expecting his visit. 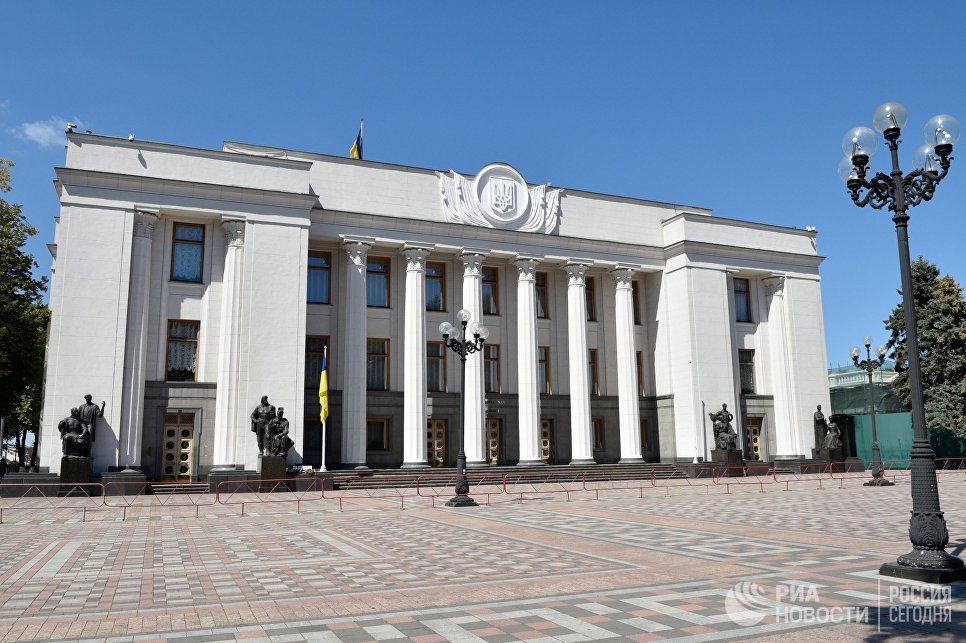 Information about the agenda started changing only on October 26th, when it became known that the Minister of Foreign Affairs Klimkin, who for unknown reasons rushed to Germany, met Volker there on October 25th. Moreover, it became known from Volker’s “Twitter”, because Ukrainian politicians were as silent as partisans. Only after this did Klimkin report to the press that Kurt promised to stop by in Kiev.

At the same time, on October 26th-27th the official narrative of a substantial part of the visit was formed. Short and indistinct official statements (all negotiations were closed for the press) boiled down to the fact that Volker suddenly blazed with desire to tell Poroshenko what he conducted negotiations with Surkov about three weeks ago.

This, however, is not such a secret. They talked about the course of implementing the Minsk Agreements in general and about the proposal of Russia to place UN peacekeepers in Donbass, in particular. After the US blocked in the UN the Russian draft resolution about introducing peacekeepers, this topic became irrelevant. Nevertheless, it is precisely this topic that was chosen as an explanation for the aim of Volker’s visit. I think that it didn’t happen incidentally, as it’s not incidental that the topic of peacekeepers appeared after Volker and Klimkin’s meeting in Germany. By all accounts, it is precisely during this meeting that Volker made the final decision to not hide the fact of his visit to Kiev, but to not hold back its contents. For those who want to know — in Russia, the US, or in Ukraine — why he arrived, well, the topic of peacekeepers will suffice for the public. Especially as sooner or later Kiev and Washington can try to propose their version of the resolution, and the subject will again be actualised in the information space.

So did Volker want to hide?

To answer this question we should refer to the initial source of information about the visit. When on October 21st there was an information leakage about Volker’s intention to arrive in Kiev, nobody suddenly remembered about any peacekeepers nor any Minsk. The source that leaked information noted that the visit was not planned, and that the sudden desire to visit Kiev was based on the need to learn on the ground about the internal political situation in Ukraine.

And this motivation, which was later obfuscated and forgotten, resembles an authentic one.

Indeed, by October 21st the anti-Poroshenko mutiny was ongoing in Kiev already for the fourth day – formally headed by Saakashvili. Events developed rather dynamically, but Poroshenko obviously wasn’t going to leave in an amicable way. 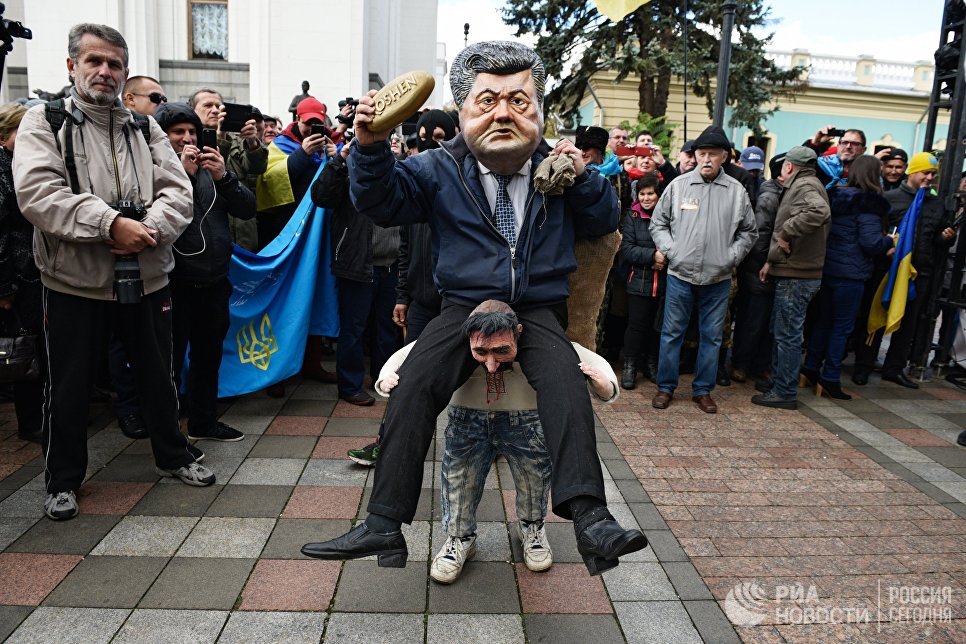 I repeatedly said and wrote that it is all the same for the Americans who will win in the intra-Ukrainian fight. Only puppets of Washington remained after the cleansing of 2014 in local politics, and whoever from them will be in power — there is no difference. But the Americans hope that a transfer of power happens in a legitimate way. They don’t need one more violent coup, finishing off the remnants of Ukrainian statehood, and de-legitimising the Kiev authorities that were legitimised by them with such difficulties.

The power resource of the parties that was taken to the streets was supposed to serve as a deterrent to opponents, but it should not have been launched into action. However, Poroshenko – not willing to leave – started demanding from Avakov the violent dispersal of the protest near the Rada, at the same time informational provocations against protesters began, and the SBU and prosecutor’s office under Poroshenko’s control tried to put criminal pressure on the hidden sponsors of the mutiny.

Saakashvili’s supporters in response also started preparing provocations capable of depicting the authorities as a bloody dictatorship that the “indignant people” are obliged to overthrow. By the way, it is precisely during Volker’s visit that Saakashvili’s supporters published Poroshenko’s plan for the dispersal of the oppositional meeting near the Rada and the activation of mass repression against mutineers and their sponsors.

The parties of the conflict went racing, and the violent option for its conclusion became almost the only one possible because of the inability of the parties to come to an agreement. Because this obviously didn’t suit the US, it was decided to send Volker to Kiev with a confidential mission. Having assessed the situation in person, he had to make (or to recommend to the leadership of the State Department to make) a decision on what the reaction of the US must be in relation to the spiralling out of control of the war between the Kiev elite.

Is it worth resigning one’s self to the inevitability of the violent scenario, the de-legitimation of the authorities, and the disintegration of the country (in such a scenario America can squeeze out for itself many beneficial things)? Or is it better to try to force Poroshenko to reconcile himself with the inevitable and to voluntarily resign? Or it is better to allow him to quell the mutiny, but to ensure that he isn’t overzealous with the repression of his enemies, who are the US’ friends.

There are several solutions to the problem, but only one is effective. It is necessary to understand how far the situation came and what resources both parties really have? How stable will Poroshenko’s power be in the event that he quells the mutiny, after all, tomorrow a new one can begin? Will the mutineers be able to keep some semblance of central power in the event of a victory? To what extent is the danger of an anti-oligarchical nazi coup serious?

All of these are not idle questions, and the correct answer to them provides the adoption of the correct decision. If an incorrect answer is given to one (or all) of them, the national interests of the US can suffer. Why didn’t they want Volker’s visit to be advertised? Because the US diligently at all levels distances itself from the situation in Kiev, showing its full non-involvement in the internal political crisis. It is clear that the inspectional visit of Volker is completely contrary to this position. 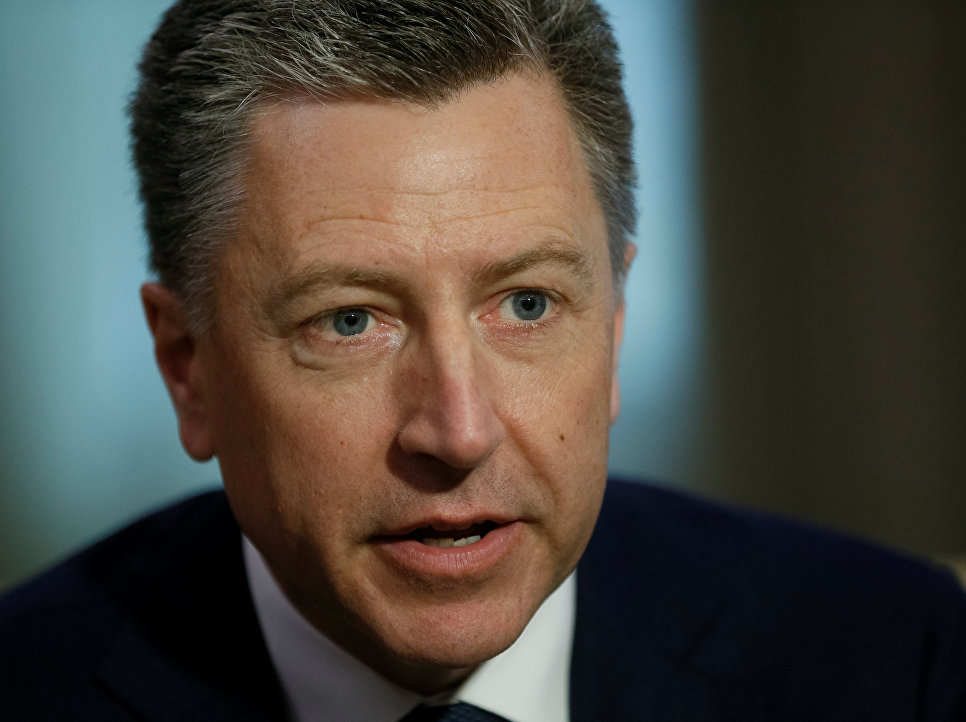 Why, nevertheless, didn’t they hide the visit? Because there was a leak. It became clear that now no matter how they hide the fact of the arrival of Volker, taking into account how many people participate to ensure events, it’s impossible to completely conceal it. In these conditions it’s more effective to recognise the fact of the event, but to give it their own spin.

That’s why in the beginning Volker met Klimkin in Germany. There the official reason for the visit was agreed (Minsk, peacekeepers, stories about a meeting with Surkov). Kiev immediately started putting it into action, taking away attention from the true purpose of the arrival of the special representative of State Department.

It shouldn’t be excluded that the question of the visit was up in the air until October 25th. The early information leakage caused serious damage. There was a question: is it really possible in such conditions in general to carry out the task in front of Volker – collecting correct information? Wouldn’t be better to wait for the events to develop?

But then they nevertheless decided not to refuse the attempts to guide events. As a rule, a proactive position is more advantageous.

What conclusion was drawn by Volker, we will learn about very soon. It will only be necessary to watch closely the accents that will be placed by the US on the course of the Ukrainian crisis. But another question is much more interesting: to what extent is the US in principle able to guide the Ukrainian events? They clearly want it, but to what extent will the Ukrainian oligarchs, who look out for number one (while for them the question is not any more about the lives of the “heavenly hundred”, but about their oligarchical lives), be inclined to listen to them…

The answer to this question directly touches on not only the interests of the US, but also Russia’s, since the crisis develops on its borders.