“FACTS MATTER” – this is the motto of the OSCE SMM, and we agree with it entirely.

In this regard, the Representation of the DPR in the Joint Center for Control and Coordination held a hearing on the facts of the violations of the ceasefire regime (CFR) near the Donetsk Filtration Station (DFS) recorded by the OSCE SMM camera and reflected in the daily reports dated November 17th and 18th corresponding to November 16th and 17th respectively.

So, in the report on November 16th the following is written verbatim:

“The SMM assessed that the projectile in flight from south to north and the subsequent incoming explosion recorded very close to the SMM camera at the Donetsk Filtration Station at 02:18 on 15 November (see SMM Daily Report 16 November 2017) was a recoilless-gun round fired 600-700m from a southerly direction. At 19:36 on 16 November, the same camera recorded a projectile in flight from south-west to north-east and a subsequent incoming explosion close to the camera, assessed as a round of rocket-propelled grenade or recoilless-gun fired approximately 250-450m from a southerly direction”.

The provided paragraph concerns two episodes of violations of the CFR directly near the DFS that were recorded by the OSCE SMM camera installed on the administrative building of the station.

Thus, the shell recorded by the camera that flew past from southwest to northeast, according to the Mission, landed already from the southern direction.

“At 19:36 on 16 November, the same camera recorded a projectile in flight from south-west to north-east and a subsequent incoming explosion close to the camera, assessed as a round of rocket-propelled grenade or recoilless-gun fired approximately 250-450m from a southerly direction near the place where, according to the Mission’s observations, the advanced positions of the ‘DPR’ are located”.

Besides the very fact that promulgating the location of the advanced positions of the Armed Forces of the DPR is a gross violation of the principles of the work of the OSCE SMM, the specified information isn’t true.

The analysis of the provided data with reference to the area testifies that in both cases the violation came from positions of the UAF located along the N-20 highway in the sector from the West to the South at a distance of 250m in a western direction and 800m in the southern direction from the DFS. 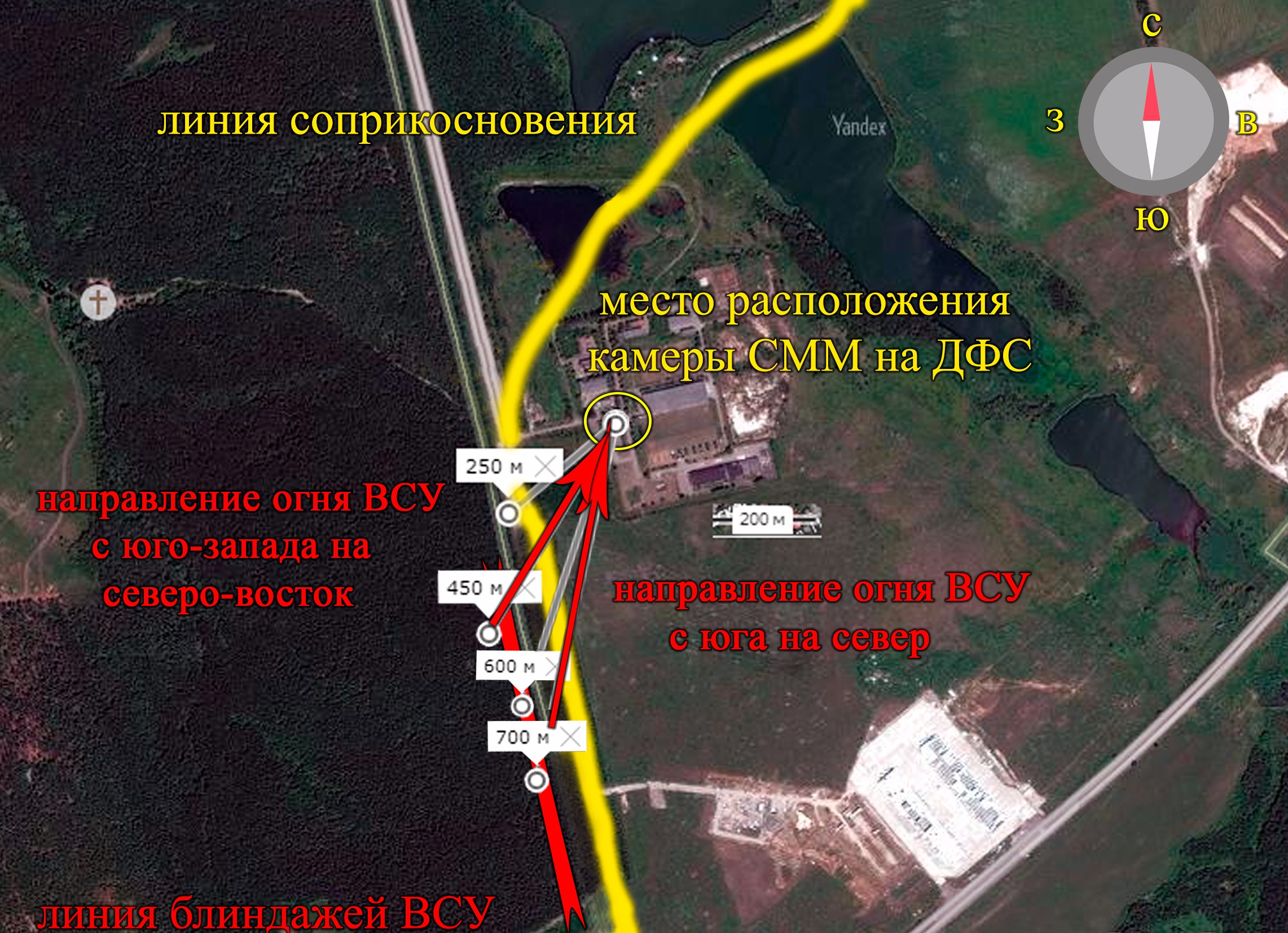 Scheme of the direction of attack on the DFS

But the closest positions of the Armed Forces of the DPR in the southern direction designated by OSCE SMM are located at a distance of no less than 1000m.

As a reminder, according to the tactical technical characteristics of the SPG-9, the targeting range of fire is 800m.

Considering the aforementioned, the question of whether this manipulation of reports and the corrections that were issued were intended or accidental, and what aims are being pursued remains open.

Also, we suggest that Mr Hug visits the territory of the DFS during his visit to the Donetsk People’s Republic and to personally inspect the distance of the positions of the sides.

Facts indeed matter – and the facts are on our side. We express confidence that the leadership of the OSCE SMM will operatively react to the precedent created by it, and will correct the error in their report.

In turn we present to the public a schematic map of the facts of shelling of the territory of the Donetsk Filtration Station with reference to the area recorded by the OSCE SMM.