Every year from the 20th of November Ukraine remembers the victims of the famine of the 1930’s. In Kiev this period of history is called Holodomor. They decorate the days of memory with pomp and such a stream of accusations that Ukrainians themselves don’t always understand what occasion there is a “banquet” for. A few years ago the appetite of one of the participants of the TV program “Maidan” on Channel 5 – belonging to the President Petro Poroshenko – was so whetted that she declared: “We must mark the high day of Holodomor as genocide”. And they so mark it as a high day.

Rumours as a source

There is nothing reprehensible in remembering the victims of tragic events in the history of your country, but only in the event that it isn’t accompanied by the distribution of false documents, forged photos, and offensive accusations towards Russia, which suffered from famine in the same way as Ukraine, Kazakhstan, and a number of other republics of the USSR. A reasonable question: if the famine of the 1930’s is the significant tragedy that Kiev and those over the ocean depict it to be, then why constantly add so many lies to it?

But now everything that is connected to those events is actually being falsified, starting with the number of victims. Ever since Yushchenko got the ball rolling, in Ukraine “10 million people dying from Holodomor” (the number of people in the republic by the beginning of the 1930’s was 30 million) is repeated like a mantra. Poroshenko also at a meeting of the UN General Assembly in September stated: “It was an artificial famine in Ukraine in 1932-1933 organised by the totalitarian regime of Stalin, which led to the deaths of 7 to 10 million Ukrainians”.

The same figures are being sounded to school students. They are not told on what basis such conclusions about the number of dead are made. Because if they are told this, then questions about the “source” can arise.

The fact is that the figures were taken from the testimonies of the political emigrant from Poland Dorota Federbush, who, being married to the activist of the underground Communist Party of Western Ukraine in the early 30’s, moved to Kharkov to escape the repressions of Warsaw. In her diary, on June 28th, 1933, she wrote: “30% of the people of Ukraine died out for hunger, i.e. more than 9-10 million”. Later during an interrogation she explained from where she took this data: “There people from the village came, they spoke about mass starvations. They said that nine million died. I didn’t believe the newspapers. It was disgusting to read. But this reflected only sentiments”.

Let’s explain in more detail. The people who arrived from the village told the Polish refugee that a third of Ukraine died out. And now this “canard” became historical justification.

Killed by a bull? A victim of Holodomor

Thus, historians have at their disposal the data of population censuses, in which it is seen that in the 1930’s the population of Ukraine continued to grow despite the fact that growth rates were slowed down. Here it is indeed impossible to speak about the death of a third of the inhabitants of the republic.

READ:  Why They Are More Afraid of War in the Western Ukrainian Provinces Than in Big Cities

Kiev explains everything very simply: the censuses were falsified. However, it doesn’t prevent “hunters of the historical truth” from refering to these same lists to talk about a reduction in the number of ethnic Ukrainians. Thus, from 1926 to 1939 their number was allegedly reduced from 23.2 million to 19.6, “whereas the non-Ukrainian population increased by 5.6 million”.

In general it is clear: “Moscow deliberately starved Ukrainians in order to deliver Russians and representatives of other ethnoses there”. In 2010 the “National Commission for the Strengthening of Democracy and the Rule of Law” headed by the Minister of Justice Onishchuk, based on these figures, added to them the average increase in the population in the USSR (16%) and made the conclusion: “The reduction in the number of Ukrainians between 1926 and 1939 was about 8 million people”. And here it is – all their necessary arguments.

I will emphasise: data on the self-identification of people is being collected. In the mid-20’s, when the peak of total Soviet Ukrainisation took place, all citizens of the Ukrainian Soviet Socialist Republic were written down as ethnic Ukrainians without any verification. In the late 30’s, when the rates of Ukrainisation weren’t so large-scale any more, these same people in this census started to specify that they are Russians. We observed the reverse process in independent Ukraine. During the census of 1989, 11.4 million inhabitants of the Ukrainian Soviet Socialist Republic specified themselves as Russians, and in 2001 only 8.3 million remained — in turn, it’s as if the number of ethnic Ukrainians grew by 0.3%. In that case, if to take as a basis the “methods” of calculating victims of the famine of the 1930’s, it is possible to safely declare the “genocide of Russians” in independent Ukraine, isn’t it? And if to calculate to what extent nowadays the population of the country was reduced, the modern “genocide” will break all records.

READ:  How Did Ukraine Get Ahead of the EU Countries in Terms of Gas Reserves?

Even the ridiculous “trial of the organizers of Holodomor“ (i.e. of Stalin, Molotov, and others) organised by Kiev in 2010, established that the number of “direct victims” who died from famine was 3.9 million.

But even this figure is obviously overinflated. When, during the last years of Yushchenko’s presidency, the “National book of memory” was being cobbled together following his initiative, they literally tried to categorise all those who perished from January, 1932 (when the famine hadn’t yet happened), to December, 1933 (when there wasn’t any more famine) as “victims of Holodomor”. Despite the strict demands of the government of Kiev, the Institute of National Memory included with difficulty 882,510 people on these lists.

We focus attention on the fact that people were also placed on these lists who died for absolutely other reasons. For example, it is possible to find such records: “alcohol poisoning”, “crushed by a bus”, “was run over by a car”, “killed by lightning”, “died in the coal mine”, “killed by a bull”. However, these people are now recognized in Ukraine as “victims of Holodomor”.

Moreover, within the framework of the project supervised by Yushchenko, information was collected that refuted the theory of “genocide” and proved that the famine didn’t “choose” people according to their nationality. Thus, in the list of “victims” from Berdyansk the nationality of 1184 people are mentioned, from them 71% are ethnic Russians, 13% are Ukrainians, and 16% are representatives of other ethnoses. Similar examples are numerous. So which ethnos in reality did these attempts try to eradicate? 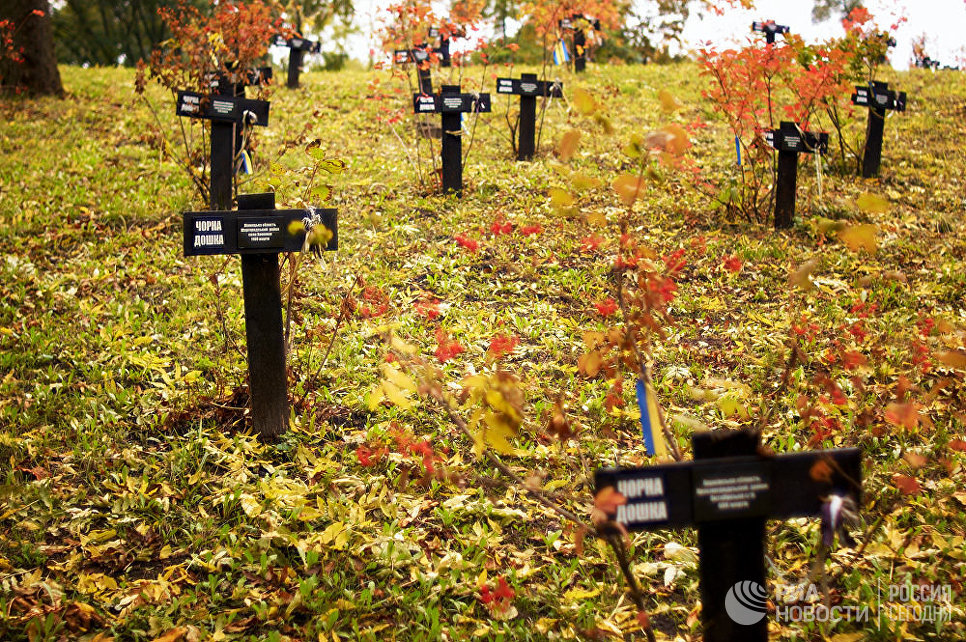 Memorial to the victims of Holodomor in Kiev

Whose famine is it?

Recently the US State Department issued a statement about the tragedy of the 1930’s, in which it “condemns efforts to deny it as a historical fact”. It is hard to say why Washington decided that someone tries to deny the fact itself of a famine in Ukraine and in other republics of the USSR. The State Duma, for example, already in 2008 adopted the statement “Memories of the victims of the famine of the 1930’s on the territory of the USSR”, having emphasised that “millions of citizens and representatives of various people and nationalities” became the victims of the tragedy. So what does the State Department condemn then? What denial?

What indeed should be condemned at all levels is the continuous attempts to falsify history – both in Ukraine and and beyond its limits. It would be worth paying attention to the fact that the overwhelming number of articles about the Ukrainian famine in the western media are illustrated by photos that don’t have any relation either to Ukraine or to the period of the 1930’s.

READ:  Theory: Biden’s Secret in the Storages of the Zaporozhye Nuclear Power Plant

The use of photos of victims of the famine in the Volga region in the 1920’s with the caption that these are the victims of “the Ukrainian Holodomor of 1933” became the common trend. On September 2nd “The Times” accompanied the article of the known journalist Daniel Finkelstein (who recently became a member of House of Lords) with a picture from the Volga region.

But this is photo of famine in Russia in 1922, not in Ukraine. Did you use the same “facts”?https://t.co/zQEvWqS3er

In a discussion with the author of these lines about this substituting of the facts, Finkelstein didn’t find anything better than to state that the victims of any famine indeed look like that. Indeed, what a difference. However, I advised him that next time he should illustrate the events of the 1930’s in Ukraine by using horrible photos of the famine in India inflicted by the British in 1876-1878. After all, there is no difference, if to believe the British lord. 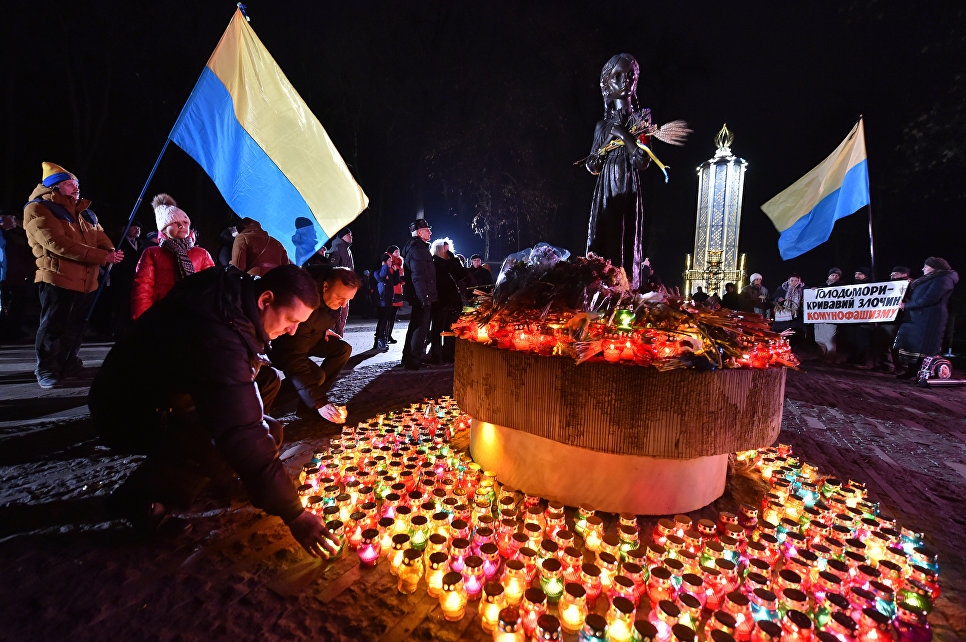 Falsifications are crimes before history

Unfortunately, these sorts of falsifications and substituting of the facts are characteristic of the majority of the western print media writing about the famine of the USSR. They actively push forward the idea of the “genocide of the Ukrainian ethnos”, which allegedly was organised by the treacherous Moscow for the purpose of “destroying Ukrainian sovereignty” (what sovereignty of the Ukrainian Soviet Socialist Republic at the beginning of the 1930’s there was, isn’t explained). They generalise figures, insert counterfeit photos, but hide important information that would smash to pieces the theory of “genocide”. For example, many decisions made by the leadership of the All-Union Communist Party (bolsheviks) concerning the organisation of food aid to the regions affected by famine, or concerning the reducing of the plan of grain procurement for Ukraine*. What can be done if it doesn’t enter into the prepared concept…

Of course, to deny the fact of a famine in the USSR in the 30’s is senseless, just like it is incorrect to write off the incident exclusively as a crop failure, ignoring indisputable errors by the leadership of the Ukrainian Soviet Socilist Republic and the USSR in general. However, the attempts to stage a dance on the bones and the “high day of Holodomor”, and to search with a magnifying glass for ethnic characteristics in the tragedy of all Soviet people is a crime before history and the memory of the people who became its victims.

#Zakharova: It is regrettable that our colleagues from the US State Department have played into the hands of Ukrainian nationalists by posting a statement on Holodomor that distorts history

Tags: HolodomorKornilovUkraineUSSR
IMPORTANT NOTICE: POSTS WITHOUT THE "NEW" LABEL ARE OLDER (PRE-2022) POSTS FROM THE ARCHIVE!
+ +