On December 6th, 2017, in the capital of Ukraine a presentation of the comic book “Cyborg. The beginning. 26.05.14” – dedicated to the “heroic” feat of Kiev’s army at Donetsk airport – took place in conjunction with the so-called Day of the Armed Forces of Ukraine.

Journalist and moderator of the event Nataliya Fedechko said in an interview to a Ukrainian publication that the comics speak about the events of 2014, when the battles for Donetsk airport took place. In the comics the soldiers of the Ukrainian army are depicted as superheroes.

“It’s not an invented story, because the guys proofread it and checked its authenticity,” insisted Fedechko.

At the same time the head of the Ukrainian Banderist snake Petro Poroshenko stated during a working trip to the Lvov region that the Armed Forces of the country are warriors of peace, who “defend” not only Ukraine, but also the eastern border of Europe against Russia. Poroshenko’s speech was also timed with the “Day of the Armed forces of Ukraine” event in the International Peacekeeping and Security Center of the National Army Academy named after Hetman Petro Konashevych-Sahaidachny in Lvov.

During the “festive” occasion in the Lvov region Poroshenko noted that 37 of the 46 frontline heroes of Ukraine are employees of the Armed Forces. In addition, he reported that more than 14,000 soldiers were decorated with state awards for the shown “courage” and “heroism”. Since neither the comic book creators nor Poroshenko himself give any actual specific examples of such “feats” by these “warriors”, it only seems fitting to fulfil this task on their behalf.

READ:  DPR Command Reports About Kiev "Zombies" Who Can Only Be Killed Via a Bullet to the Head

In June-July 2014 the Ukrainian “warriors” demonstrated their “nobleness” to the peaceful population of Lugansk with the help of Su-25 fighter jets.

In May 2014 the “warriors” “defended” the residents of Mariupol using tanks and rifles, standing in the way of “Russian troops”, which for some reason can’t be seen in the videos…

These “warrior of peace” also “defend” the residents of Donbass sometimes using unconventional methods that Nobel peace prize winners like Barack Obama can’t help but be in awe of.

“In Debaltsevo, in a column of runaway displaced people, we found suspicious people. In the car with the inscription ‘Children’. We started to bring them one by one to intelligence. At this moment shelling begins. There are only two of us. My client became animated, and started to look behind him. I took a knife, I took him by the scruff of his neck, and I drove a knife into his side, a little bit under the skin. I lift him on his tiptoes. He can twitch, but the pain from it is very serious. You can even curve the spine. I quietly brought him to the destination [with the knife inside him – ed], with the machine gun behind the shoulder…”

Sometimes messages of “peace” are sent to Ukrainian passport holders living in Donbass over the airwaves, via a mortar shell. For example, in the photo below a serviceman of the Ukrainian Armed Forces transmits the message “all the best for the children”. On July 27th, 2014, Kristina and her daughter Kira were walking in the park when the “warriors” of the Ukrainian Armed Forces tried their best to earn another medal for “heroism”. This story is known to all “separatists” and “Kremlin trolls”, but seemingly escaped the attention of the “civilised” international community.

READ:  Strikes on Ukraine Created a Turning Point in the Special Operation 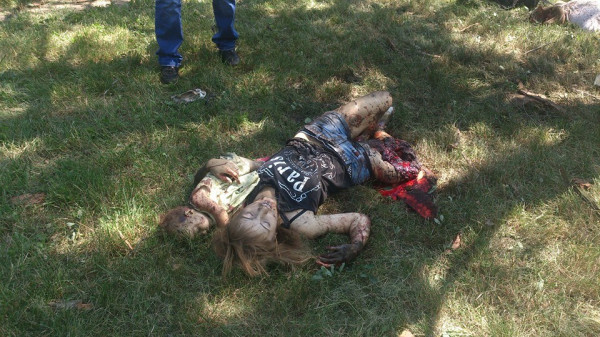 And another mother, Anna Tuv, also saw the “courage” of the “warriors of peace” with her own eyes, after her daughter was torn into two pieces and husband killed on the spot from shelling ordered by the “supreme commander” Petro Poroshenko.

Very often the “defenders of Ukraine’s territorial integrity” are so “professional” in their military affairs that they don’t even need to look at where they aim!

“Frankly speaking, we don’t know what the targets are that we shoot at — we were given coordinates, we fire one-two shells, if over there it doesn’t calm down, we fire a couple more shells.”

The “efficiency” of the Ukrainian Armed Forces became so good that the former representative of Ukraine at the negotiations in Minsk Roman Bessmertny was worried that the International Courts might “reward” the “warriors of peace” with some high-level PR. According to him, the Secretary of the National Security and Defence Council of Ukraine Aleksandr Turchynov would be “rewarded” most of all, since it is he who launched the so-called “anti-terrorist operation”, which gave many haters of “Moskals” the opportunity to be decorated by the government of “reformers”.

And of course, no “warrior” can consider themselves as worthy until they are blessed by the head of the recognised-only-in-Galicia Ukrainian Orthodox Church (Kiev Patriarchate). In fact, Poroshenko is in such a hurry for his mighty men to ascend to the skies that he does everything he can to speed up the process, turning every open field into a collection of coffins, sometimes labelled as “surgical waste”.

It is said that the devil is in the details, and this expression can be taken literally in the context of Poroshenko speech on the occasion of the “Day of the Armed forces of Ukraine”. After all, if what the President said is true, then why is there a need to produce a comic, insisting that the soldiers are “heroes”. By all accounts, the Ukrainian Armed Forces hope to switch to NATO standards in the upcoming years, and should this transition indeed take place the “warriors of peace” can compare their own “courageous” experience with that of the North Atlantic Treaty’s in Belgrade and Benghazi.

Tags: ATOPoroshenkoUAFUkraine
IMPORTANT NOTICE: POSTS WITHOUT THE "NEW" LABEL ARE OLDER (PRE-2022) POSTS FROM THE ARCHIVE!
+ +