The occasional reading of Le Figaro can sometimes unearth a few pearls! I quote: “The Balfour Declaration is one of the diplomatic documents, the most important of the history of the Middle East in the 20th century: the promise of a jewish national home in Palestine; political zionism obtains an international legal guarantee” (Véronique Laroche-Signorile, 31/10). And here is how strong it is, even very strong. Passing off the Balfour Declaration as a “international legal guarantee” can be categorised as a downright conceptual exploit.

Signed on November 2nd, 1917, this declaration was a letter from the British Foreign Secretary Lord Balfour to the Zionist leader Lord Rothschild. What does it say? “His Majesty’s government view with favour the establishment in Palestine of a national home for the Jewish people, and will use their best endeavours to facilitate the achievement of this object, it being clearly understood that nothing shall be done which may prejudice the civil and religious rights of existing non-Jewish communities in Palestine, or the rights and political status enjoyed by Jews in any other country.”

For London, this text had a double objective. The First World War was in full swing, and it concerned attaching the world’s jewish opinion to the Entente. By placing this gift at the feet of the zionist movement, they hoped to obtain the enthusiastic support of American jews. But this is not all. Sponsored by the British Empire, the jewish national home had to become an advanced bastion in the heart of the Middle East. In reality, the Balfour Declaration is a unilateral act that falls under the imperial policy of the British.

That’s why this text did not offer any “international legal guarantee” to anyone. To badly name things forbids to understand them, and in reality it was exactly the opposite. Forging an alliance between the Empire and the nationalist European movement kneaded with colonial ambitions, the letter of Balfour is precisely the denial of any international legal guarantee. It acts as the dispossession of rightful owners of land, which is offered for Zionist predation in violation of the right of peoples to dispose of it themselves. The Balfour Declaration is the colonial rape of arab Palestine, and nothing else.

As is said by the Zionist writer Arthur Koestler, “one nation had solemnly promised another the territory of a third”. The jewish national home bloomed thanks to this forfeiture – the violence of the Zionist conquest, finding itself sanctified in the name of “civilizing work”, which the British occupier (1922-1947) dared to avail themselves shamelessly. At the heart of the Balfour Declaration is European colonialism in its distressing banality. In reality it distinguishes between two populations that are not housed in the same boat. The first one sees itself as granting political rights, while the second one (90% of the inhabitants) is swept aside with the stroke of a pen. The first is the subject, the second is a simple object. 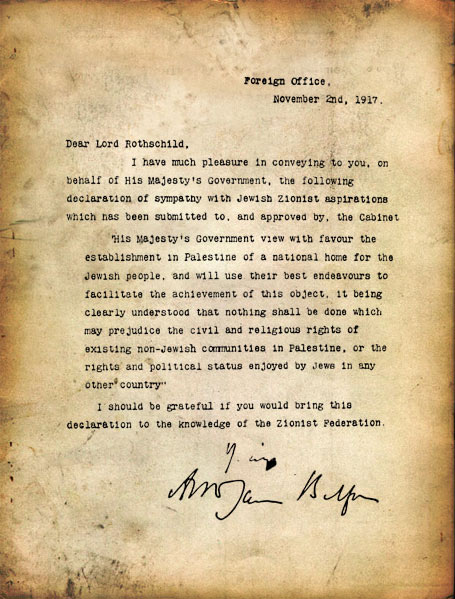 Certainly, it recognizes “civil and religious rights” for “non-jewish communities”. But this recognition was hollow, by default. To define them, negation was used. In the text there is the “non-jewish people”, and not arabs. The text deprives them of a positive existence, it treats them as supernumerary, which are excluded from the benefits of self-determination. Because “civil and religious” rights are not “political rights”, but rights relating to personal status and to the exercise of worship. Let Arabs retain their customs, as long as they do not impede the march of the jewish people towards sovereignty!

The Balfour Declaration exercised symbolic violence in the long run against the Palestinians. It sealed the alliance between a nationalist movement, which wanted “a Palestine as jewish as England is English” (Chaim Weizmann), and an hegemonic Empire, which expected to remain as such. The Empire has fallen, but Zionism imposed itself by force. By depriving them of political rights, Balfour transformed the indigenous into second-class residents, it made them foreigners in their own country. The violence of the colonial text didn’t cease to exercise its misdeeds for over a century, culminating in attempted obliteration, which only the resistance of the Palestinian people could to defeat.